IDOT Hosting Open House on Proposed Changes to I-55, from the Loop to I-355

Just released by the Illinois Department of Transportation:

The Illinois Department of Transportation (IDOT) invites you to attend an open house public meeting to learn about important updates to the preliminary engineering and environmental study (Phase I) for the improvement of Interstate 55 from Interstate 355 to Interstate 90/94 project.

Environmental approval was received by the Federal Highway Administration in July 2016 for one managed lane, which will operate as an Express Toll Lane (ETL) in each direction. IDOT has initiated a new Phase I study to further improve operations and reliability along the corridor by evaluating the addition of a second ETL within the median from east of Interstate 294  to I-90/94 while the section from I-355 to I-294 would remain as one ETL in each direction. The public is invited to attend and provide input on the additional alternative under consideration.

The meeting will be conducted in an open house format. Interested people can attend anytime from 4-7 pm. Exhibits will be on display and an audiovisual presentation will be shown continuously during the meeting. Project team members will be present to discuss the project and answer questions.

Posted by Southwest Chicago Post at 5:27 PM No comments:

The Midway area’s elected officials this week continued to apply pressure to the Chicago Department of Aviation to provide relief for  homeowners whose government-supplied windows and doors are emitting foul—and possibly toxic—fumes.

Quinn said he hopes residents will sign the online petition in advance of another joint meeting of the City Council Committees on Finance and Aviation, expected to occur downtown next month.

Here is a link to the petition:

The petition directly addresses what appears to be the Chicago Department of Aviation’s ongoing refusal to provide replacement doors and windows for Residential Sound Insulation Program homeowners whose doors and windows were installed more than 10 years ago—and are therefore out of warranty.

Several aldermen, including Quinn, have publicly requested that CDA ensure replacement of all faulty doors and windows, regardless of warranty.

Other requests from aldermen, including one that CDA conduct a mass-mailing to all 10,000-plus RSIP households to alert them to the ongoing situation, have not been responded to.

A CDA promise to respond to a request for an update on the number of RSIP households with confirmed foul odors has gone unfulfilled.

In addition to the online petition, Quinn joined three aldermanic colleagues—Edward M. Burke (14th), Michael R. Zalewski (23rd) and Raymond Lopez (15th)—in amending the City Code to enable the Department of Aviation to conduct testing on all RSIP windows and doors that have been found to be emitting odors. Further, the new language mandates that CDA test a minimum of 10 percent of all RSIP households where windows and doors are found to emit odors.

Currently, CDA is testing the indoor air quality of nine Midway area homes. The new ordinance, if passed, would require that number to rise as the number of confirmed cases rises.

“The language of this ordinance memorializes what we have asked the Aviation Department to do,” Quinn said.

The move was praised by Chrysler Village homeowner Pam Zidarich, who said she welcomes “any significant move designed to make the Chicago Department of Aviation stop turning a deaf ear to us and get serious about its promise of transparency. We should not have to hold their feet to the fire; but they’re making us do it, so we will.”

Zidarich is the founder of the non-profit Midway Defective Window Recipients, a group of Southwest Sides homeowners who are concerned about the RSIP windows and doors they have received.

The defective windows and doors have been provided to homeowners near Midway and O’Hare in recent years through the Chicago Department of Aviation’s Residential Sound Insulation Program, an initiative designed to improve the quality of life for people living near the airports by reducing jet-engine noise in their homes.

Homeowner concern over RSIP windows and doors was first reported exclusively by the Southwest News-Herald in early June, with a number of front-page follow-ups as the story developed over the summer and fall.

While the large majority of RSIP homeowners have not voiced complaints, a small minority—about 250 households--report that their windows and doors are emitting foul-smelling fumes. Homeowners, some of whom have been diagnosed with cancer in recent years, are highly concerned that the fumes may be toxic—causing or at least exacerbating their serious illness, and possibly having long-term, negative effects on the health of their children.

It appears that years of exposure to heat and sunlight may be breaking down the materials used in the manufacture of the windows and frames. One of those materials is polyvinyl chloride (PVC), a known carcinogen banned in some countries outside the U.S.

Posted by Southwest Chicago Post at 1:13 PM No comments:

Zalewski to Speak at Civic Meeting

Twenty-third Ward Alderman Michael R. Zalewski is scheduled to be the featured speaker at the next public meeting of the Garfield Ridge Civic League, set for 6 p.m. Wednesday, November 15 in the auditorium at Kennedy High School, 56th and Narragansett.

Zalewski will offer remarks about the ward and then field questions from the audience.

Posted by Southwest Chicago Post at 6:42 PM No comments: 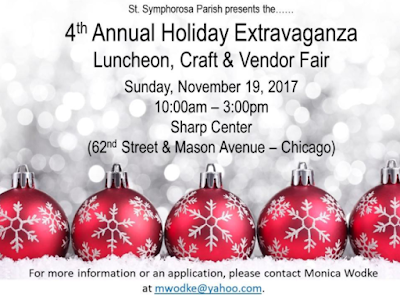 Posted by Southwest Chicago Post at 3:21 PM No comments:

Cutting Hair at Archer and Normandy since 1965

After nearly 52 years at Archer and Normandy, Stan Podlasek has put down his barber shears.

“Life has been good to me. I can’t complain,” Podlasek said as he sat in his iconic shop, closed since April, when health concerns—both Stan’s and his wife of 67 years—forced his retirement at age 89. He turned 90 in September.

“I don’t miss the business, but I miss the people. I really do,” he added. “Some customers become your friends. Some still call me at the house.”

A native of the Archer Heights community, Podlasek grew up above his family’s business, Podlasek’s Tavern, at 47th and Kedvale, opened immediately after Prohibition ended in the early 1930s. (Today, the site is home to Illinois Bar and Grill.)

He attended St. Bruno School and Tilden Tech. He has one brother, a Garfield Ridge resident still going strong at age 93.

After his father died, Podlasek took over the tavern in 1951 and ran it for nine years. An uncle ran Podlasek’s grocery store nearby.

That same year, he and his wife moved into a house near 54th and Oak Park, when new homes were sprouting up quickly in what had been a vast Garfield Ridge prairie.

Over the years, they were blessed with four daughters and a son; and later, grandchildren and great-grandchildren.

He attended barber college and worked in Hinsdale for several years before building his own shop on Archer—a twin storefront: half for his shop and half an income property.


Stan’s Barber Shop opened just after Christmas 1965—not the best time for barbers, especially new ones trying to get a toehold in business.

With the Beatles, Rolling Stones and other British Invasion rock stars sporting longer hairstyles, millions of boys across the U.S. starting growing their hair over the ears—and then to their shoulders as the hippie styles reached their peak during the Summer of Love in 1967.

“Yeah, it was something,” Podlasek recalled with a chuckle.

He tells the tale of a time when one of his daughters’ young suitors stopped by the house for the first time.

“So my wife meets him at the door. She looks at him. He’s got hair down to his shoulders,” Podlasek recalled.

“My wife says, ‘You know what my husband does for a living? He’s a barber. Why don’t you go see him?’ My wife was always a character,” he adds with a chuckle.

Today, the young man—now sporting a short and stylish cut—is his longtime son-in-law.

Just about the longest-running business in Garfield Ridge, Podlasek can look out his window and tell visitors what used to be at any given location. MacNeal Hospital’s clinic used to be Jewel Foods. Dr. Coler’s chiropractic office used to be Normandy Deli and Widen’s Bakery. The day care center across the street used to be a shop that made prosthetic eyes; and before that, it was a tailor/dry cleaner’s. Before 1976, Obbie’s Pizza was Geno’s Pizza. And on he goes, a living history book of Garfield Ridge commerce.

While Podlasek has retired, the barber pole has started spinning again at his shop. A younger barber is renting the space and has decided to keep the “Stan’s Barber Shop” name and sky-blue neon sign.

“I’ve had a very good life,” he concluded. “I’m surrounded by family and friends. My daughters still call every day. It’s a blessing.”

Posted by Southwest Chicago Post at 12:41 AM No comments: