Want to Salute the Class of 2020? Commemorative Posters Available

Looking for a quick, easy way to honor the members of the 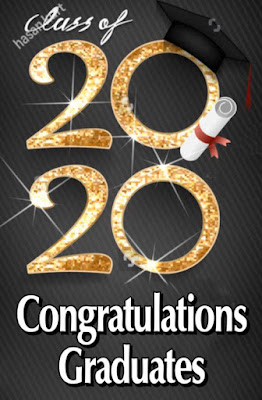 Check out this top-quality poster--suitable for displaying in your window at home, at work or in your vehicle.

This smart-looking poster is 12 x 18 inches, printed on high-gloss 100-pound poster board.

These unique, commemorative posters are available at no charge (one per household, please) at the Archer Heights Credit Union, 6554 W. Archer (Archer and Nashville).

Plans call for these posters to be available in a self-service display in the AHCU vestibule, right at the entrance--starting on Tuesday, May 5.

These posters are provided as a public service by:

Note: if you represent a local school and want a bulk supply of these posters, please call Geno Randazzo at 708-705-7900.


So whether you have a Class of 2020 member in your house, 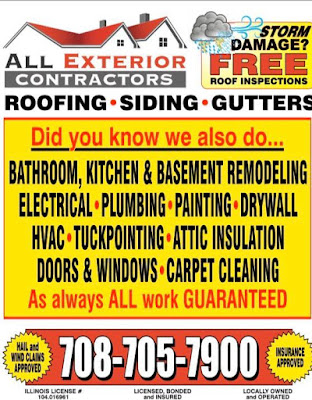 or if you don't but you just want to say "Way to go" to all the 2020 graduates in the neighborhood, head over to the Archer Heights Credit Union and get yours!

Posted by Southwest Chicago Post at 5:23 PM No comments:

Say motorist was drunk, threw senior to the ground


A 28-year-old Archer Heights man was charged with DUI, as well as aggravated battery, after he was arrested in the 5100 block of South Tripp at 5:28p.m. Sunday, April 12.

Diego A. Lemus-Ordonez, of the 5100 block of South Kildare, allegedly threw an elderly man to the ground after his vehicle was stopped. The man was a passenger in his vehicle, a CPD spokesman said.

Lemus-Ordonez also was charged with having open alcohol in his vehicle.

A 31-year-old woman from suburban Palos Park was charged with possession of heroin with intent to deliver after she was arrested during a traffic stop in the 7900 block of South Central Park at 6:37 a.m. Thursday, April 9.

Lorraine E. Saban, of the 12500 block of South 86th Avenue, was arrested without incident by police responding to a 911 call of a motorist slumped over the wheel of a vehicle.

Police said there was a passenger in Saban’s vehicle. That person was released without being charged with a crime. Police declined to say how much heroin they allegedly found on Saban.

Two Clearing men were charged with trespassing after they were arrested in the 5800 block of South Mobile at 3:22 a.m. Friday, April 10.


Anthony Morales, 18, of the 5700 block of West 63rd Place; and Kyle C. San Miguel, 22, of the 6100 block of South Massasoit, allegedly were spotted trespassing in Kennedy High School, by a security guard.

A CPD spokesman said police responding to the guard’s call chased Morales and San Miguel a short distance on foot before apprehending them.


San Miguel also was charged with theft, although a CPD spokesman declined to say what he allegedly stole from the school.

Hugo A. Mares allegedly threatened a woman during an argument, according to police responding to a “domestic dispute” call.

A CPD spokesman did not say what the alleged threat was.

According to public records, Mares has been arrested four times by CPD since 2016—three times on undisclosed warrant charges.


Daryl Wilkerson, of the 7900 block of South Maplewood, allegedly stole merchandise from the CVS Pharmacy nearby, although police declined to say exactly what had been stolen.

Deion M. Bevely, of the 2500 block of West 64th Street, allegedly struck a police officer as he was trying to hit another person, a CPD spokesman said.

According to public records, Bevely has been arrested six times by CPD since 2014 on charges that included aggravated unlawful use of a weapon and violating parole by having contact with gang members.


A 39-year-old Garfield Ridge man was charged with domestic battery after he was arrested at his home in the 5400 block of South Lockwood at 1:15 a.m. Sunday, April 5.


Mario A. Jaramillo allegedly punched a 59-year-old man in the head and body during an argument.


A dozen arrests for Scottsdale man


A 25-year-old Scottsdale man was charged with possession of a controlled substance after he was arrested during a traffic stop in the 5500 block of South Central at 8:45 p.m. Wednesday, April 8.

Albert G. Sandoval, of the 8100 block of South Knox, reportedly was a passenger in a vehicle pulled over by police and had drugs on him, a CPD spokesman said without elaborating.


Hector Rebolledo, 27, of suburban Bellwood, and Rey Rebolledo Jr., of suburban Stone Park, allegedly were spotted dousing a truck with gasoline and setting it ablaze.


According to public records, Rey Rebolledo Jr. has been arrested eight times by CPD since 2016 on charges that included possession of a controlled substance, drinking on the public way and driving on a suspended license.


According to a law enforcement source, both men have gang ties.


She hit me with an ashtray, man says

A 20-year-old Vittum Park woman was charged with domestic battery after she was arrested in the 4800 block of South Cicero at 6:38 p.m. Monday, April 6.


Kaitlyn Rose Kwak, of the 4700 block of South Lamon, allegedly threw an ashtray at the head of a 30-year-old man during an argument.


According to public records, Kwak has been arrested five times by CPD since 2018, on charges that included prostitution and obstruction of traffic by a non-motorist

Posted by Southwest Chicago Post at 6:44 PM No comments: 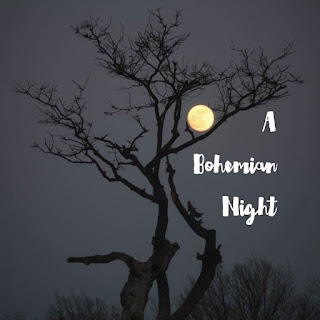 With taverns, nightclubs, theaters and coffeehouses closed—and live entertainment a fading memory—Clearing wife and husband Reneé Blixt and William Seiyo Sheehan are pulling together a diverse group of artists to celebrate the human spirit.

The hourlong event will feature six performers—most from the Chicago area but a couple from beyond.

“I wouldn’t call it vaudeville, but there will be a variety of performances,” Sheehan said. “Singing, spoken word, dance, comedy…I think people who watch and listen will be glad they did.”

There is no admission charge, and instructions on how to view the event can be found on the “Bohemian Night” Facebook page.

Renée Blixt has many years on the Chicagoland scene.

Renée has played for crowds ranging in size from 6 to 60,000 people, and at venues from churches to bars to stages and stadiums. She is an accomplished pianist, as well as vocalist.

She will serve as mistress of ceremonies for Bohemian Night, and she will perform.

“We’re well suited to put this together,” Blixt said. “With my background in entertainment and his in tech, I think it will work quite well.”

Also on the bill is Lemon Knife, a Chicago-based hard rock duo pulling from classic rock, punk, garage rock, and anything built on riffs to create a melodic and eclectic sound that is remarkably big for being put out by two people.

Tracks from their debut album, Songs About Water and Death, have also received considerable radio play by stations such as WKQX’s Demo 312, WIIT, and WRSE. They released a history– based conceptual EP, In Our Darkest Sour, in October 2018, and their second full-length album, I Know That This is Vitriol, in December 2019. They are currently working on their third album, a concept album taking place in the mythological realm of Purgatory.

Also scheduled to perform is Kyle Strong, keyboardist for Think Floyd USA, a tribute band that honors the music of Pink Floyd.

Also on the bill is comedian Tom Simmons, a self-described contrarian and 21-year veteran of stand-up comedy.

Posted by Southwest Chicago Post at 7:45 PM No comments:

Most news stories about 10-year-old kids who want to do a good deed for first responders seem to involve lemonade stands, home-baked cookies or something similarly sweet.

But Giovanni Alonzo is not your average 10-year-old.

A fourth grader at Byrne School, Gio recently took his love of computers and found a way to help those serving on the front lines.

His mom, Desiree, said Gio kept asking his parents how he could help. “That’s how we raised him, to help out,” she told me in a conversation we had.

Gio and his dad, John, found a program online that would enable Gio to make mask bands that would take the pressure off the ears when individuals wear facemasks. Using a 3D computer, it took Gio four hours to make seven bands. 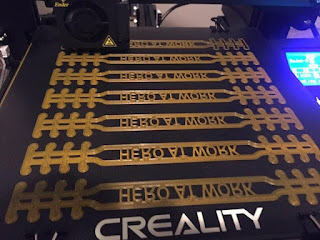 On the back of the bands are the words, Hero at Work.

Gio kept at it and made dozens of bands. Then he donated 50 of them to the Chicago Lawn (8th) District Police. Next time around he wants to make bands and hand them out to doctors, nurses and others who work directly with pandemic patients.

While he misses his teachers and friends at Byrne, Gio is 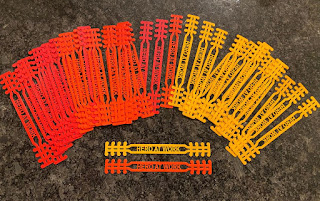 happiest behind the computer, according to his mom. Gio is very interested in game coding and 3D graphics. Through that, his interest in 3D printing grew.

Desiree said of Gio, “He likes getting involved. We explained to him that people are working hard to keep us safe and we have to help them. That’s what he was trying to do.”


Keep up the good work, Gio! You make us all proud.

And a note of thanks from me to Al Cacciottolo, for letting me know about this—yet another reason why Clearing and Garfield Ridge are such great places to live.

Posted by Southwest Chicago Post at 2:31 PM No comments: