More than a thousand Southwest Siders are expected to take 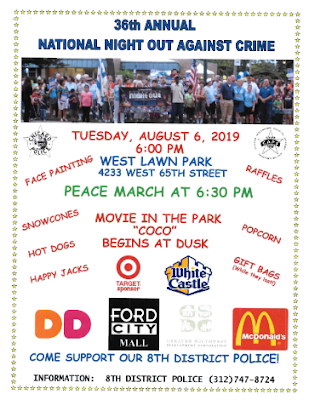 a public stand against crime at the area’s annual National Night Out Against Crime celebrations, set for Tuesday, Aug. 6.

An NNO event for all residents of the Chicago Lawn (8th) Police District is set for 6 p.m. Tuesday at West Lawn Park, 4233 W. 65th St. Year after year, it is one of Chicago’s largest and most successful NNO celebrations.

“It has a real small-town feel,” said West Lawn resident Barbara Ziegler, the event’s principal organizer and one of the most visible civilian crime fighters in Chicago. “It’s draws a wide range of people—from babies in strollers to moms and dads to senior citizens, everyone; and while it’s a lot of fun, it’s also about bringing people together to build safer and better neighborhoods—not just in West Lawn—but all across the district, which we do every year.”

Ziegler, who heads the Eighth’s District’s volunteer court advocacy program—arguably the largest and most effective in the city—said that about 800 men, women and children will be at the event. When she started running the event 17 years ago, about two dozen people attended.

The event will include a prayer, remarks by police officials and elected representatives, a “peace parade” around the perimeter of the park at 6:30 p.m., and more. Special emphasis will be placed on thanking Chicago Police and others in law enforcement.

CPD’s mounted patrol and canine units will be on hand to give demonstrations, and there will be a number of giveaways for adults and children who live in the district, while supplies last. A color TV will be raffled off; those who march are eligible to win.

Cold drinks, snow cones, popcorn and other treats will be available to keep everyone cool.

Included in the goody bags for adults is potentially lifesaving information that includes basic tips on how to make an effective 911 call, how to escape domestic violence, how to join the local CAPS effort and more.

A number of local businesses, large and small, have made contributions to the NNO at West Lawn Park, now in its 17th year. Nationally, NNO is in its 36th year.

At dusk, a movie suitable for families will be shown outside.

All are welcome to bring blankets and lawn chairs.

While the NNO celebration at West Lawn Park is for people in every neighborhood in the Eighth District, two crime fighting organizations on the west end are planning their own, smaller events.

In Beat 812 (the Clearing neighborhood west of Central

Avenue), the Clearing Night Force neighborhood watch group will gather near Hale School at 62nd and Melvina for a prayer vigil at 6:00 p.m., followed by a motorcade through the community and then refreshments at Hale Park.

The site at 62nd and Melvina is a memorial to two local girls who lost their lives in a gang-related shooting in 1995. Community shock and outrage over the double homicide led to the formation of the Clearing Night Force, one of Chicago’s oldest neighborhood watch groups.

811 (all of Garfield Ridge west of Central Avenue), will organize a fire truck-led motorcade that will start at 7 p.m. at St. Daniel the Prophet Church, 54th and Nashville, and wind up and down the neighborhood’s arterial streets.

It will end where it started, capped off with a brief prayer vigil at dusk.

All Beat 811 residents are invited to join in the motorcade and attend the vigil afterwards.

For more information on the district-wide observance at West Lawn Park, call the CPD Eighth District CAPS Office at (312) 747-8724.

Posted by Southwest Chicago Post at 11:05 AM No comments:


A 46-year-old Clearing woman was charged with domestic battery after she was arrested at her home in the 6100 block of South Menard at 2:39 a.m. Sunday, June 23.


Yesenia Montero was apprehended after she allegedly struck a 44-year-old man.

Want to work directly with Chicago Police to prevent crime in your neighborhood? If you live in and/or own a business in Beat 812 (see map) make plans to attend your next CAPS meeting, set for 7:00 p.m. Wednesday, July 10 at the Clearing Branch Library, 6423 West 63rd Place. Hear updates on crime in your neighborhood and learn how you can work with neighbors and police to make the community safer and better for all.


A 32-year-old man from south suburban Lansing was charged with domestic battery after he was arrested on the street at 63rd and Kilbourn at 4:51 a.m. Saturday, June 22.


Joel A. Moreno, of the 2000 block of 185th Street, was apprehended after officers reportedly saw him scuffling with a 29-year-old woman.


A 53-year-old Scottsdale man was charged with domestic battery after he was arrested in the 8300 block of South Kolmar at 2:05 p.m. Tuesday, June 25.

Eduardo Aragon, of the 8100 block of South Knox, was apprehended without incident. He allegedly punched a 49-year-old woman, police said.

According to public records, Aragon has been arrested five times by CPD since 2016, on charges that included domestic battery (three times) and aggravated DUI.


A 42-year-old West Elsdon man was charged with three counts of aggravated assault after he was arrested at 5:30 p.m. Monday, June 17 at his home in the 4100 block of West 57th Place.

According to public records, Carlin was arrested at his home last month and charged with domestic battery.


A 42-year-old Summit was charged with battery and criminal trespass to land after he was arrested at the Dunkin’ Donuts at 5615 S. Harlem at 8:53 a.m. Saturday, June 22.

Jose Mendoza of the 7600 block of Lawndale, allegedly walked into the shop although he had previously been told never to come back, a CPD spokesman said.

He also allegedly threw a drink on another person. Police declined to say what the drink was or if the other person was a customer or employee.


A 43-year-old Scottsdale woman was charged with retail theft after she was arrested at a Ford City store at 5:40 p.m. Wednesday, June 19.


Justina Nkechinyere Anaele, of the 4100 block of West 80th Place, was apprehended with out incident. Police declined to say what allegedly was stolen or from which store.

Thomas E. Beach, of the 5900 block of Condado Drive, was apprehended without incident. Police declined to say what was reportedly stolen or from what store.

According to public records, Beach has been arrested eight times by CPD since 2014 on charges that included identity theft, possession of a controlled substance, panhandling and criminal trespass to land.


A 64-year-old South Shore woman was charged with retail theft after she allegedly stole cosmetics from a store at Ford City.

Gwendolyn Washington, of the 7300 block of South Perry, was held by store security and arrested by police at 4:10 p.m. Saturday, June 15.

According to public records, Washington has been arrested five times by CPD since 2015—each time on a retail theft charge.

Yvette Rhonda Moss, of the 5600 block of South Honore, was arrested without incident.

According to public records, Moss has been arrested three times by CPD since 2016—once on a retail theft charge at Ford City.


Palos Hills woman charged with felony after bust at Walgreens

A 40-year-old Palos Hills woman was charged with felony possession of a controlled substance, as well as using a fraudulent prescription, after she was arrested at the Walgreens at 7150 W. Archer at 12:25 p.m. Thursday, June 13.

Amani Abraham, of the 9700 block of South Kingsbury Court, was reportedly arrested at the pharmacy with a controlled substance in her possession.

Police did not say what the substance was. A pharmacist told police that Abraham said she was dropping off a prescription for another person.


An 18-year-old Vittum Park man was charged with armed violence and possession of a controlled substance after he was arrested at a home in the 4500 block of South Lawler at 6:53 p.m. Friday, June 14.

Jashun M. Lambert, of the 4800 block of South Laporte, was arrested by police executing a search warrant, a CPD spokesman said.


Kaitlyn Rose Kwak, of the 4700 block of South Lamon, was arrested after she allegedly told an undercover CPD officer that she would perform a sex act for money.

Dawn H. Schackart, of the 4500 block of South Lawler, was arrested by a specialized unit working in an undercover capacity.

According to public records, Schackart has been arrested five times by CPD since 2014.


A 21-year-old Clearing man was charged with cannabis possession after a traffic stop that occurred in the 6100 block of South Archer at 10:05 p.m. Saturday, June 22.


Leonel O. Pfeifer, of the 6200 block of South Meade, was apprehended after police reportedly found cannabis in his vehicle.

Posted by Southwest Chicago Post at 6:12 PM No comments: