Looking to get rid of unwanted yet sensitive documents (like old 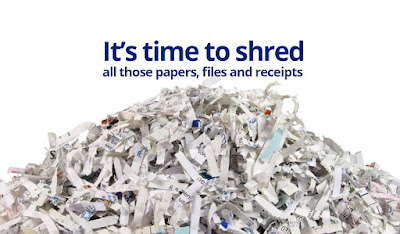 If you live in the 18th Ward, make plans to head over to the Westport Commons Shopping Center, 3250 W. 87th St., from 9:00 a.m. to 1:00 p.m. Saturday, May 8--where 18th Ward Ald. Derrick Curtis will host a shredding event.
This is for 18th Ward residents only. IDs will be required. Please remove all staples, binders, rubber bands and paperclips from the papers to be shredded.
Residents may also bring unwanted electronics items to be recycled.
For further detail on the event, call the 18th Ward aldermanic office at (773) 284-5057.
Thanks to Alderman Curtis for providing this useful public service!
# # #
advertisement

advertisement
# # #
Posted by Southwest Chicago Post at 11:50 PM No comments:

A spring plant sale, sponsored by St. Mary Star of the Sea Parish, is underway.

Fancy geraniums in four-inch pots are $1.75 each.

Begonias, impatiens, marigolds, pansies and periwinkles are $1.00 each.

Tomato plants (cherry, beefsteak and early girl) are $1.50 each.

Pepper plants (green and jalapeño) are $1.00 each.

This is a very popular annual sale, so pre-orders are strongly recommended.

advertisement
# # #
Posted by Southwest Chicago Post at 11:29 PM No comments: 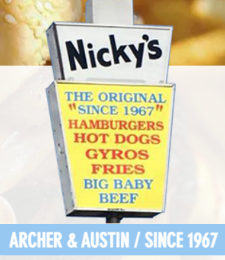 who recently robbed a local fast-food restaurant, but they responded in a way that touched the heart of the business’ owner.

Upon learning that Nicky’s at Archer and Austin was robbed at gunpoint, dozens of local men, women and teens responded by flooding the venerable hot dog stand with business.

“Yeah, it’s been incredible,” said owner Angelo Lilas of the sudden surge in business. “We’re getting waves of regular customers, as well as customers we haven’t seen in a while and even people who have never been here. Many are stopping in to say they’re sorry about what happened, as they order food for themselves and their families.”

What triggered the community response was a clip from a video surveillance camera that showed a man with a gun robbing Nicky’s on Monday, April 26. The robber, who initially posed as a customer and ordered food, was in the restaurant for a total of about 60 seconds. About 45 seconds into his visit, he pulled a gun and demanded money. Staff at Nicky’s complied, and the robber walked out quickly.

He appeared to be a Hispanic man about 5-foot-10, medium build, wearing a red baseball cap, gray-and-black jacket and black pants, and white gym shoes with blue or black accents.

Those with useful information to share about the crime are encouraged to call CPD Area 1 detectives at (312) 747-8380.

News of the robbery traveled quickly in the neighborhood. While some expressed anger over the crime, others moved past that and suggested that everyone respond in a positive manner.

“Look, we’re probably not going to catch this guy who robbed Nicky’s, but we can all head over there with cash in hand and order food,” said Julie McIntyre.

Many took the cue.

“I’ve been going to Nicky’s since 1997, but I haven’t been there in a while,” said Dan Sotillo. “Well, that changes today. I’m going over there and ordering food for my family.”

Jeff Jimenez said that his family members “have never been to Nicky’s before. But that’s going to be different. We won’t put up with this. We can’t have these criminals set the tone for the neighborhood.”

Terry Lynn Prohaska said she hasn’t been to Nicky’s “since I was a teenager in high school. I’m going to order big babies and fries for all my co-workers.”

Lilas said the community response “has been tremendous. Even before I told anyone [about the robbery], I was getting phone calls from people, asking if we’re OK.”

Angelo grew up in the business. He has worked there since about age 8, when his job was to dispense soft drinks for customers.

He graduated from St. Laurence High School in 1994. A number of his classmates were also his customers.

“[In the robbery], we lost only a few hundred dollars. I can replace that,” Lilas said. “My concern was about the safety of my employees and my customers. I mean, it was crazy. It was scary. This guy had a gun and I didn’t know what he was going to do.”

When the robbery occurred, there was one other customer in the lobby, as well as Lilas and four employees behind the counter or in the back room.

advertisement
# # #
Posted by Southwest Chicago Post at 9:00 PM No comments: 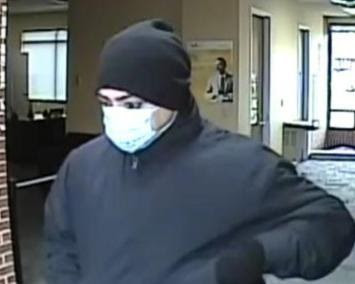 $1,000 for information that leads to the arrest and conviction of a man who robbed the TCF Bank branch at 6315 W. 55th St. at 3:27 p.m. Monday, April 19.
The bandit was described as white or Hispanic. He has a medium build and wore a black knit hat, a black coat and black gloves. A Chicago police sergeant said the robber made off with about $3,400 and ran east through an adjacent alley.
FBI officials are saying that the man should be considered armed and dangerous.
Also, he may possibly be the man who robbed the TCF Bank branch at 6141 S. Archer (Archer and Austin) at 11:29 a.m. Saturday, March 27. In that crime, a Chicago Police sergeant said the bandit made off with more than $2,000 and ran away east from the bank.
Anyone with information regarding this man should contact the FBI's Chicago Field Office at (312) 421-6700. You can also submit a tip at: tips.fbi.gov.
# # #
advertisement

advertisement
# # #
Posted by Southwest Chicago Post at 3:04 PM No comments:

Looking to get rid of unwanted yet sensitive documents (like old

Then make plans to head over to Byrne School, 54th and Oak Park, from 8:30 to 10:30 a.m. Saturday, May 1--where 23rd Ward Alderman Silvana Tabares will host a shred/drug take-back event.
This is a contact-free event. Motorists dropping off papers or prescription meds are asked to wear masks and stay in their vehicles. Volunteers will remove papers and/or outdated/unwanted meds.
The prescription drug take-back is sponsored by the Cook County Sheriff's Office.
Meds should be in their original containers or a sealed plastic bag. Not accepted are liquid meds, anything in an aerosol container, medical waste (including used gloves, masks, syringes, needles, lancets, tubing, IV bags) and illegal drugs.

Volunteers will not accept any electronics at this event.
For details, call the alderman's office at (773) 582-4444.

Thanks to Alderman Tabares for providing this useful public service!
# # #
advertisement

advertisement
# # #
Posted by Southwest Chicago Post at 7:39 PM No comments: 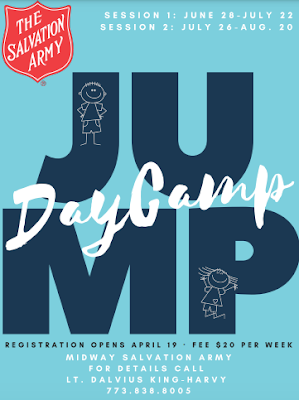 The Salvation Army JUMP camp will offer children the chance to engage in a well-rounded curriculum with their peers, while offering parents a respite and low-cost childcare option. The JUMP camp will include: 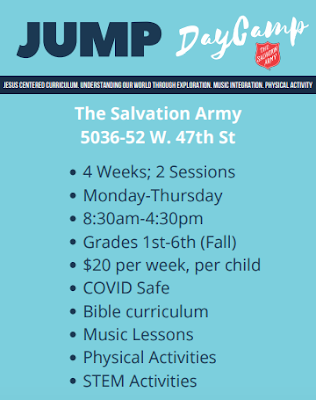 environment that stimulates the minds of youth, and inspires teamwork and good health,” said Lt. Dalvius King-Harvy, Corps Officer for The Salvation Army Chicago Midway Corps. “We are including meals and snacks, and a full-time schedule of activities to remove some of the burden from parents who have struggled working while their children were at home due to COVID.”

The Salvation Army JUMP camp is open to students in grades 1 through 6. Each session will have 30 slots available, but cohorts within the camp will be limited to 10 children each. All public health guidelines will be followed.

Registration for JUMP camp is now open. Parents can sign up by calling Lt. Dalvius King-Harvy at The Salvation Army Chicago Midway Corps at (773) 838-8005. The cost is $20 per week per child.
# # #
advertisement 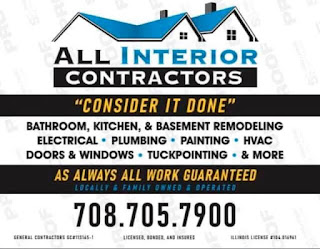 advertisement
# # #
Posted by Southwest Chicago Post at 5:42 PM No comments: