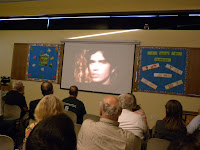 Film Archives and the Garfield Ridge Branch Library) for hosting a screening of a newly (and beautifully) restored print of a 1970 film ("Eight Flags For 99¢") that looks at the Vietnam War through the eyes of the Silent Majority--specifically, in Garfield Ridge.

The film (embedded below) played to a packed room at the Garfield Ridge Branch Library on the evening of Thursday, September 12.

The audience was mostly current and former Garfield Ridge residents, including some who were in the 1970 film.

The discussion after the screening (video highlights embedded below) echoed the sentiments expressed in the 1970 film and shows--sadly, perhaps--that not much has changed in 40-plus years.

More info about the film from Chicago Film Archives:

"8 FLAGS FOR 99 CENTS" (1970, Mike Gray Associates, Chuck Olin, Joel Katz) was produced in response to President Nixon’s famous November, 1969 speech when he contrasted the unlawful and vocal anti-war protesters to the respectful “silent majority” who were in favor of remaining in Vietnam to fight communism. This film explores the thoughts and opinions of the “silent majority” represented by the folks living in the Garfield Ridge neighborhood on the Southwest Side of Chicago.

The commentary that arose from the Garfield Ridge community turned the filmmakers’ expectations (as well as conventional wisdom of the times) on its head. Expecting to record pro-war and pro-government slogans and sentiments, the filmmakers were caught somewhat off guard by the thoughtful, nuanced, and distressed analysis articulated by those that were interviewed and recorded. Contractors, firemen, mothers, fathers, barbers, Vietnam vets and clerks have varied and layered thoughts on America’s involvement in the war. One 20 year-old store clerk is most moving as she speaks with composure yet deep anxiety about the uncertain future her peer group is facing. Residents of all ages speak to the war in this film with very little evidence of hostility between generations, shattering another iconic image of those politically tumultuous times.