Crews hired by the Chicago Department of Public Health (CDPH) will spray insecticide throughout several Southwest Side neighborhoods on Wednesday, August 10, in the evening.

Weather permitting, the spraying will begin at dusk and continue through the night until approximately 1 a.m., with licensed mosquito-abatement technicians in trucks dispensing an ultra-low-volume insecticide spray.

On the Southwest Side, the area to be sprayed includes parts of Chicago Lawn, Gage Park, Back of the Yards and West Englewood. The boundaries zig and zag, and go as far east as Ashland, as far west as California, as far north as 47th Street, as far south as 63rd Street, Here is the map provided by CDPH: 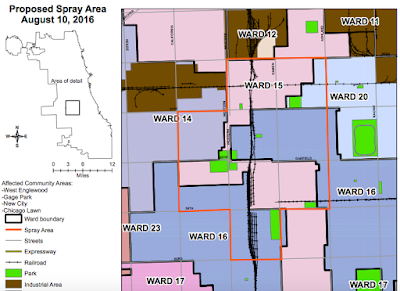 Similar spraying will occur on Tuesday, August 9 on the Northwest Side:

CDPH reminds residents to take precautions against mosquitoes that may carry the virus, including:

In addition to spraying, CDPH's mosquito abatement program includes dropping larvacide in catch basins, which helps limit the number of mosquitoes that can carry the virus, and regularly testing mosquitoes caught in traps throughout the city.

As part of ongoing response efforts, CDPH will continue to collect mosquitoes from traps located throughout the city and test these mosquitoes for West Nile virus. Using results of these tests, CDPH will determine the appropriate steps to be taken in order to best protect Chicago residents. On August 2, CDPH sprayed in the Auburn Gresham, Chatham and Washington Heights neighborhoods.