The dean of the Chicago City Council has vowed to take action to address the failure of Chicago Department of Aviation Commissioner Ginger S. Evans to abide by a Council order to appear at a public hearing at Hale Park.

Speaking at a joint hearing of the City Council Committees 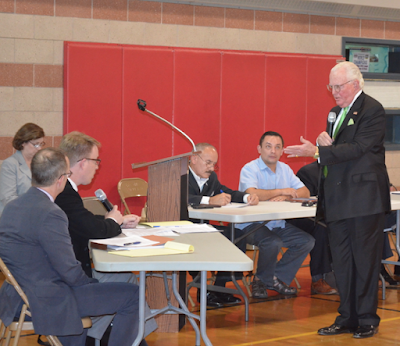 on Finance and Aviation on August 23, a visibly perturbed 14th Ward Ald. Edward M. Burke (chairman of the Committee on Finance) began his remarks by walking directly in front of Evans’ representative, CDA Deputy Commissioner Aaron Frame, and asking him to read from the final section of a measure passed several weeks ago by the City Council:

“Be it ordered by the City Council of the City of Chicago: that the Commissioner of the Chicago Department of Aviation appear before the City Council Joint Committee on Aviation and Finance to address the issue concerning windows installed pursuant to the Residential Sound Insulation Program at Midway Airport, including testing locations, findings, and plans to abate and prevent any potential risk.”

The hearing, attended by about 100 Southwest Side homeowners and others, was held to address concerns about defective windows—which are emitting fumes that may possibly by poisonous--supplied to homeowners in recent years through the Department of Aviation’s Residential Sound Improvement Program.

Some of the homeowners have been diagnosed with cancer in the years after their windows were installed. They continue to wonder if the odors coming from their windows are toxic or simply an aesthetic annoyance.

Burke noted that Frame read from a statement that said that CDA considers the matter “a very important issue,” and followed it up by saying, “Apparently, it’s not important enough for the Department of Aviation to have its commissioner comply with an order of the City Council to be present. Is that correct?”

Frame responded that it was his understanding that Evans had a prior commitment that took her out of state.

Burke shot back, “Does she think her prior commitments are more important than the safety and the security of the good people who live out here and worry about the air that their children and their parents and their spouses are breathing?”

Burke was not specific about what consequences Evans might face, but vowed that her failure to appear would be “taken up by the Council” in the near future.

The absent Evans also was criticized by some of the seven other aldermen in attendance, most notably 13th Ward Ald. Marty Quinn, 23rd Ward Ald. Michael R. Zalewski (chairman of the Committee on Aviation) and 15th Ward Ald. Raymond Lopez, who said he found it amazing that Evans, the highest paid official in all of city government at $400,000 a year—according to a published report—could not make time to be at a hearing she was ordered to attend.

The hearing, which normally would have been held at City Hall, was held in the neighborhood to better accommodate Southwest Side homeowners, Burke’s press secretary said.

Many in the audience greeted Burke’s comments with applause and similarly expressed incredulity about Evans.

“I find it interesting that [Frame] did not say where she was or what she was doing,” she said. “I don’t live in Burke’s ward, but I know that if you publicly play games with him, if you embarass him in front of the people he represents, you do so at your own risk. You have to be quite powerful or quite foolish to cross Alderman Burke.”

Department of Aviation spokespersons declined to say where Evans was or if her out-of-state trip was personal or city business. But a day after she was absent from the City Council hearing at Hale Park, Evans publicly posted a glowing review of the $1,750-a-week Legends Townhome in the resort community of Bozeman, Montana. 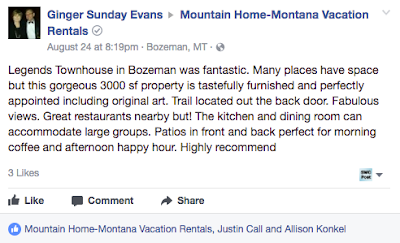 Two days before the Aug. 23 City Council hearing, Evans tweeted about a photo she posted to Instagram. The photo was of dawn over the Grand Tetons mountains, in Wyoming. The tweet appears to indicate that Evans is there to view the solar eclipse.

A Southwest Chicago Post request for clarification after the meeting was responded to by a Department of Aviation spokesperson asking about the "focus" of the story. That was provided, and CDA did not respond after that.


The anger over Evans’ absence almost overshadowed the ongoing concerns over RSIP windows. After the elected officials vented, a string of homeowners offered testimony about the windows in their homes.

The number of homeowners reporting problems continues to grow. Since the issue was first reported exclusively by the Southwest News-Herald in early June, the number has grown from four homeowners in the Chrysler Village section of Clearing to more than 80—in Clearing, Garfield Ridge, West Elsdon and West Lawn.

According to the CDA website, homeowners with questions about the sound-insulation windows and doors they had installed through the program should call (773) 838-5632.