‘3 Yards and a Cloud of Dust’ now available

In an era when multi-millionaire athletes sit out games for reasons like “unspecified soreness” and “stiff neck,” Chicago-area sports personality Tim Maher has written a true tale about some of the most rugged young men anywhere: the City champion 1970 St. Rita Mustangs football team.
Maher, a co-captain of that legendary squad, has 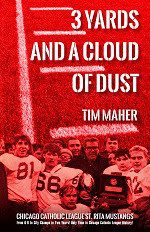 penned and self-published “3 Yards and a Cloud of Dust,” a 200-plus page book newly available in paperback for $14.95 at chicagocatholicleaguefootball.com.

“I’ve been thinking about writing this book for years, and I finally did it. Hey, I’m a guy who can’t spell ‘cat’ and yet now I’m a published author,” Maher joked during a recent book signing at Bookie’s New and Used Books, 10324 S. Western. “Seriously, though, this book is a perfect Christmas gift for the thousands of men who—as teenagers—played football in the Chicago Catholic League, as well as thousands more who watched from the stands.”
While some fans of Chicago Catholic League football history know of the storied squad—which amazingly went from 0-9 in 1968 to 9-2-1 in 1970—few, other than the players themselves, recall the details. 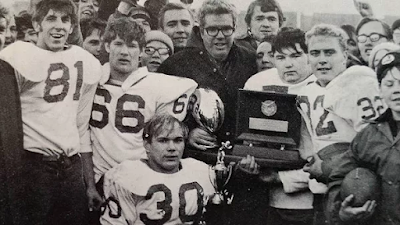 But Maher, along with a handful of his teammates who are all now 64-year-olds scattered across the Southwest Side, the southwest suburbs and beyond, brings it all back: from the brutal summer practice sessions in Michigan to three November victories at Soldier Field over tough CCL opponents (Fenwick, Loyola and Leo) to a December Prep Bowl triumph over Lane Tech before a Soldier Field crowd of 65,745.
St. Rita alumni—and other Catholic high school graduates--will smile as they read descriptions of the mud, blood and thuds in the brick-walled tight space at St. Rita’s home field near 64th and Claremont—typically a path to glory for Mustang teams, usually a dead-end to defeat for opposing squads.
The book brings back recollections of grit, of trials by fire, of coaches being tough on players as they turned boys into men—teaching them how to overcome adversity, how to be hard but fair, and more. 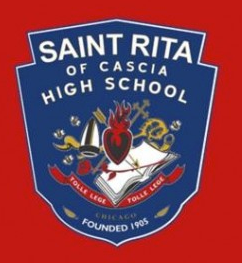 “We didn’t have what [high school] football players have today. After a double-session practice in 100-degree heat, we’d get two salt tablets. Not like today--not bathed in water, not chugging down Gatorade. We had papaya juice—and it was great because it had grass, blood, snots, everything in it. You drank it, it had ice in it,” Maher chuckled.
And so it goes in the book, less of a warm and fuzzy stroll down memory lane and more of a gritty grind down an alley.
In chronological fashion, Maher and others relive each game of the 1970 season. Included are hand-written game notes and black-and-white photos that offer a glimpse into a time when football was often more fight than finesse, when the sport was part bare-knuckled brawl.
As he has been for years—as a sports promoter, radio 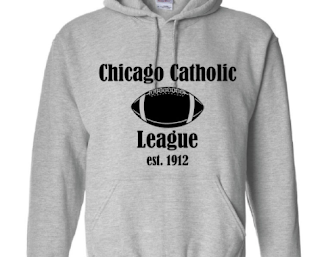 personality and more--Maher is an unabashed fan of Chicago Catholic League football. In “3 Yards” he tips his cap to the states of Texas, Ohio, California and Florida—long known for their powerhouse prep football teams. But he adds that if any schools from those states want to play “a real game of football,” they should contact the CCL.

“We will play you at your stadium, in your parking lot, in an alley, in a cornfield, at a beach,” Maher wrote. “Makes no difference to us. We will show up.”
Maher is a South Side native who grew up at 5417 S. Racine, across the street from Sherman Park, where as a boy he wore the uniform of the Visitation Ramblers—butting heads with such Southwest Side grid powers as Queen of the Universe and St. Mary Star of the Sea
Maher dedicated the book to his mother, Mary Jean, and his father, John, a 1944 St. Rita graduate and football player who joined the Marines and earned a Purple Heart fighting on Okinawa.
One of the well-wishers at the book signing was Bob Wojtalewicz, co-captain of the 1970 St. Rita championship team.
“We ain’t seen each other in 35 years, but I love him to this day,” Maher said. “That’s one great thing about the Catholic League—you hate each other when you’re there on the field; but after that you discover that you’ve forged a bond, a kind of brotherhood, in a way, that lasts for years. You shake hands with a man from the Catholic League, you know you’ve shaken the hand of a man of honor—a man whose word is his bond.”