Angry pot seller run over by fleeing buyer
An 18-year-old man from suburban Franklin Park was listed in critical condition at Loyola University Medical Center after he was injured on the street in front of 6908 W. Archer at about 8:50 p.m. Thursday, Feb. 1. The victim’s girlfriend, a 19-year-old River Forest woman, told police that her boyfriend was at the scene to sell cannabis to another man. The victim reportedly handed over the cannabis, but the buyer ran away without paying. The seller chased him, but the buyer reportedly jumped in an SUV. The seller apparently tried to stop the vehicle, but appears to have been dragged as the vehicle backed up on Archer. The victim was ejected onto the sidewalk near the entrance of Southwest Ace Hardware (it had been closed for about an hour at that point), and the SUV sped away west. When police arrived, the victim was still on the sidewalk, incoherent and with multiple skull fractures, broken facial bones and a broken arm. On Monday afternoon, police said the driver of the SUV was not yet in custody. Surveillance footage from a nearby camera captured some of the crime. 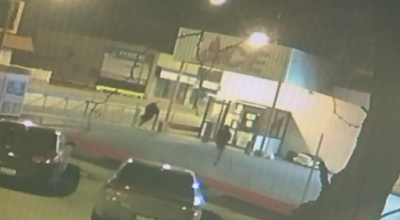 Photo below: The buyer's SUV (with brake lights), stopped momentarily just after the victim was thrown to the sidewalk, a moment before it pulled away and headed west on Archer.


Reputed gang member shot in the leg
A 32-year-old Chicago Lawn man described by police as a documented gang member was shot in the right calf as he walked with friends down a sidewalk in front of 6602 S. St. Louis at 10:11 p.m. Sunday, Feb. 4. The victim was driven to Holy Cross Hospital, where he was reportedly uncooperative with police investigating the crime. A witness told police that the shooter shouted a gang slogan and fired from a white Uplander SUV. No one is in custody.

Want to work directly with Chicago Police to prevent crime in your neighborhood? If you live in Beats 815 or 821 (see map), come to St. Bruno School (south end), 4839 S. Harding, at 7:00 p.m. Wednesday, February 7 and attend your monthly CAPS meeting. Hear updates on crime in your neighborhood and learn how you can work with neighbors and police to make the community safer and better for all.

Reputed gang member shot in the ankle
A 24-year-old man described by a law enforcement source as a documented gang member was shot in the ankle as he walked down a sidewalk in the 6400 block of South Kedzie at 3:01 p.m. Friday, Feb. 2. The shooter fired from a red van. The victim was transported to Holy Cross Hospital, where he was listed in good condition. No one is in custody.

Man shot in the leg
A 25 year-old man was shot in the leg as he stood in the 2600 block of West 64th Street at 7:10 p.m. Thursday, Feb. 1. He was transported to Advocate Christ Hospital, where he was listed in good condition. No one is in custody.

Bar patron beaten unconscious, robbed
A 24-year-old West Lawn man was beaten unconscious and robbed when he walked in a bathroom of a bar at 3344 W. 47th St. at about 3 a.m. Jan. 28. The victim had been drinking at the bar and was jumped by four or five thugs, who beat him and stole his Matricula ID, driver’s license and $250 cash. A worker at the bar reportedly told the victim that the attackers were local gang members. He helped the victim to his car. The following day, the victim awoke with a headache and drove himself to Mount Sinai Hospital, where he was treated for a concussion. The crime was reported to police on Jan. 30. The attackers were described only as Hispanic men.

Suburbanites carjacked at Wendy’s
A 19-year-old Orland Park man told police that a gunman carjacked him as he sat in his vehicle in the parking lot of Wendy’s, 5679 S. Archer, at 11:15 p.m. Wednesday, Jan. 31. The victim told police that he and two passengers—a 20-year-old man and a 19-year-old woman, both Bridgeview residents—were approached by a thug who had just gotten out of the passenger side of a blue SUV. The criminal pulled a revolver and ordered them out of the vehicle, a silver 2006 Hyundai Tucson. They complied, and the gunman jumped in and sped away east on Archer. The thug was described only as a white man age 20-30.

Robbed while working in garage
A 56-year-old West Elsdon man was robbed at gunpoint as he worked in his garage in the 3700 block of West 58th Place at 1:30 p.m. Jan. 29. The victim told police that two men walked up, placed a gun to the back of his head and ordered him to lie on the floor. The victim refused, but did surrender $400 cash. While the thugs were counting the money, the victim fled into his house. The robbers were described only as black men.

Robbed while working in garage
A 42-year-old West Lawn man and a 35-year-old Brighton Park man were robbed at gunpoint as they worked in a garage in the 3800 block of West 60th Place at 1:35 p.m. Tuesday, Jan. 30. The victims told police that two criminals walked up, waved guns and ordered them to lie on the floor. They complied, and the robbers took $340 from the younger man and $250 from the other man before running away east. They were described as black men age 24-27, about 5-foot-11 and 150 pounds, wearing dark-colored clothes.

Gunmen threaten railroad security guard
A 34-year-old unarmed security guard was threatened at gunpoint as she confronted three criminals stealing items on BNSF railroad property near 3900 W. 41st St. at 7:40 a.m. Sunday, Feb. 4. The victim told police that she was responding to a call of men entering the rail yard through a hole in a fence. When she spotted them stealing boxes from a nearby truck trailer, one thug pointed a pistol at her and said, “I’ll shoot you, b~tch.” They then fled in a silver PT Cruiser. The police report did not indicate what exactly was stolen or provide a significant description of the criminals.

Danny’s burglars seen on camera
Burglars entered Danny’s Neighborhood Pub, 6021 S. Archer, and stole two cash drawers containing about $200 cash. The crime was discovered by a manager, a 28-year-old West Lawn man, at about 8 a.m. Sunday, Feb. 4. Security footage showed the burglars entering via a door on the west side of the building at about 3:45 a.m. and exiting via the front door. Danny’s owners have posted surveillance images on the eatery’s Facebook page.

Steal skid steers from Bobcat
Burglars forced their way through a gate at the Midway Airport cellular lot at 6239 S. Cicero and stole a set of skid steers from a Bobcat parked at the site. The skid steers are valued at $1,200, according to a project superintendent for the victim, a Rosemont-based general contractor.

Three bikes and more swiped from garage
Burglars broke through the service door and the overhead door of a garage in the 5500 block of South Keeler and stole three bicycles, a five-ton jack, an air compressor, a small vacuum and assorted tools. The crime was discovered by the victim, a 44-year-old man, at 8 a.m. Friday, Feb. 2.

Garage burglary may have been interrupted
Burglars forced open the service door of a garage in the 5200 block of South Lawndale but apparently failed to steal anything. The crime was discovered by the victim, a 31-year-old woman, at 1:28 p.m. Friday, Feb. 2. She told police that several valuables from the garage were stacked by a door, but apparently the crime was interrupted and the burglars fled.

Purse with cash taken from home
Burglars forced open the front door of a home in the 3600 block of West 67th Place and stole a purse with about $230 inside. The crime was discovered by the victim, a 40-year-old woman, at about 3 p.m. Thursday, Feb. 1.

Garage on Komensky burglarized
Burglars broke into a garage in the 4400 block of South Komensky and stole a concrete cutter, two weed trimmers, two leaf blowers, a nail gun, a compressor, a tile cutter, two hammer drills, a portable drill with battery, and a Midas saw. The crime was discovered by the victim, a 49-year-old man, at about 3 a.m. Sunday, Feb. 4.

No loot for burglar at Kedzie restaurant
A burglar tried but failed to break all the way into Krispy’s Seafood and Chicken, 8255 S. Kedzie. The store’s surveillance cameras showed a man trying to pry open a rear door shortly after 6 a.m. Jan. 29, but then giving up and leaving. Footage showed him to be a black man age 30-45, about 5-foot-10 and 170 pounds, wearing a blue, button-up winter jacket.

Delayed report of garage burglary
Burglars broke into a garage in the 6100 block of South Kenneth and stole a snow blower, a grass trimmer, a leaf blower, two car speakers, a cordless drill and other items. The crime was discovered by the victim, a 42-year-old man, at 7 a.m. Jan. 15 but was not reported until two weeks later.

Ladder stolen from garage
Burglars forced open the service door of a garage in the 4800 block of South Karlov and stole a metal extension ladder. The crime was discovered by the victim, a 53-year-old man, at 4:50 p.m. Jan. 30.

* * *
Want to work directly with Chicago Police to prevent crime in your neighborhood? If you live in Beat 814 (see map), come to Vittum Park, 5050 W. 50th St., at 7:00 p.m. Thursday, February 8 and attend your monthly CAPS meeting. Hear updates on crime in your neighborhood and learn how you can work with neighbors and police to make the community safer and better for all.

Burglars hit elderly woman’s garage
Burglars forced open the overhead door of a garage in the 3900 block of West 83rd Street and stole three car jacks, three toolboxes, two hand drills, a welding machine, a car jumper set, 4 vehicle rims, four tires and other items. The crime was discovered by the victim, a 78-year-old woman, at about 5 a.m. Jan. 22. She reported it to police nine days later.