A Strong Family in Need of a Boost

A Clearing family that has stood strong for so many over the years now finds itself in need of a little strength from others.

The Salzburg family—and specifically, Tom Salzburg—is battling a sudden diagnosis of a formidable disease, mounting financial bills, the indifference of insurance companies and an uncertain future. 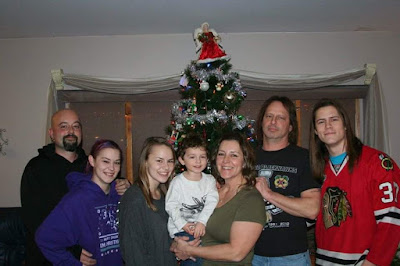 
In response, other family members—as well as friends and neighbors—have organized Salzburg Strong, a growing campaign to raise funds and provide other forms of assistance.

A major fundraiser is planned for April at Bourbon Street, and all who want to help make the event a success are invited to attend a planning meeting—dubbed the Salzburg Strong Holiday Mingle and Jingle—set for 7 to 8:30 p.m. Monday, Dec. 30 at the popular entertainment venue, 3359 W. 115th St., Merrionette Park.

People who want to donate in a more immediate sense are encouraged to visit the Salzburg Strong GoFundMe page online. Since it was started on Nov. 13, the GoFundMe campaign has raised $18,405 from 172 donors. The goal is $50,000.

“I want to thank each and every one of you from the bottom of my heart for your generous donations,” wrote campaign organizer Sue Schulz. “To say that Tom and Kelly are overwhelmed with the love and support shown is an understatement.”

For those who don’t want to make a donation online, checks made payable to Salzburg Strong may be set to BMO Harris Bank, 101 Burr Ridge Parkway, Burr Ridge, IL 60527, attention: Jason K. Refer to the account number ending in 5432.

The confirmation came about six months after Tom noticed his jaw felt tight, his speech was occasionally slurred and he was coughing while eating or drinking. At first, he brushed off the symptoms as perhaps a winter cold or simply sore muscles.

But after several months of medical tests, the diagnosis came.

Tom has Bulbar Onset ALS. Relatively uncommon, Bulbar Onset ALS affects the speech, swallowing and breathing functions first before spreading to the limbs. It is a progressive disease that causes the death of neurons that control voluntary muscles leading to paralysis of the entire body. There is currently no cure; and since his diagnosis, Tom has declined at a rapid pace, according to a profile posted online.

The diagnosis would be tough enough for the average person—but more so for Tom, a machinist and welder by day and an acclaimed rock drummer and singer by night.

In the 1980s, Tom earned his stripes with No Mercy and Tattoo. In recent years, he has been a key member of Bad Medicine and Motley II. He founded and fronted Cooper’s Dead Things, an Alice Cooper tribute band. Tom’s son, Tommy Jr., is the drummer in that band.

Tom no longer has the strength to wear his welder’s helmet, and he can no longer play in the band he created. Things most folks take for granted are a chore for Tom. It can take him an hour just to eat a small meal, if only because chewing and swallowing are becoming impossible.

“I’ve learned a lot [from the ongoing ordeal],” said Kelly Salzburg, Tom’s high school sweetheart and wife of 25 years. “I’ve learned that insurance companies suck. They are a nightmare.

“But I’ve also learned some very good things,” she adds. “I’ve learned that there are many people out there willing to help—and they’re not just family and friends.”

“People have asked me, ‘What can I do?’ and sometimes I struggle to answer because I don’t always know what we need,” Kelly continued. “But as time goes on, I’m learning what that is.”

As an example, she mentioned a man who heard about Tom’s plight and called her out of the blue. His son and Tommy Jr. had played hockey years earlier at St. Laurence High School. The man, a carpenter by trade, offered to assess the Salzburg home and make modifications that Tom will need in the future—ramps, handrails, widened doors and so forth.

Accepting assistance is never easy for a proud family—even one like the Salzburgs, who for years have helped raise funds for St. Rene Goupil School and Parish, as well as other families. One such family is the Bragiels, who went through their own ordeal in recent years, when two or of their three children were diagnosed with cancer (and have since beaten the disease).

“[Accepting help] was the hard part for us, and Dwayne Bragiel was the first person to get in my face, in a good way, and say, ‘We need to have a fundraiser,’ and I’m like, “Oh no no. I don’t want my family and friends to go through—you know—just so much time and effort.' So I’m like, ‘We’re OK, we’re OK.’”

“At the time we were both still working. But then Dwayne says, ‘Remember that conversation we had in the parking lot at volleyball? Look, people want to help. You need to let people help you. It helps them to help you.' So I said, ‘Yeah, I guess so.’ I’m learning that there are a lot of good people out there in the neighborhood, even people we’ve never met, who will step forward and help—even without being asked. It’s heartwarming.”