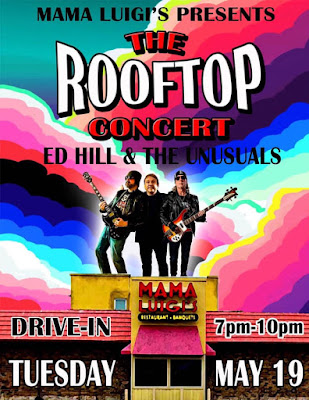 Avenue isn’t exactly Savile Row; but the comparisons were inevitable last week after a rooftop rock concert in Bridgeview.

Fifty-one years after the Beatles’ storied 42-minute performance atop their Apple Corps headquarters in London, Ed & The Unusuals—a three-piece, classic-rock cover band heavily influenced by the Fab Four—delivered the goods for three hours from the roof of Mama Luigi’s Restaurant.

“I had the rooftop idea,” Ed Hill said. “I mean, with [the pandemic], musicians basically can’t work right now. So I asked myself, ‘What's a safe way to help people feel normal again?’ The concert is what I came up with.”

The band has been a regular at Mama Luigi’s for several years, so 75th and Harlem was a natural choice. Hill and bandmates Desperado (bassist Phil Panczuk) and Ringo (drummer Mike Hudson) offered to play the unusual gig for free—although they were compensated by the restaurant.

So the band climbed atop the roof and lit things up at 7 p.m. Tuesday, May 19—playing a set list influenced by the Beatles, the Rolling Stones, Led Zeppelin, Pink Floyd, Elvis, Jimi Hendrix and other rock icons.

The audience was below, in about 55 vehicles parked in the restaurant’s west parking lot.

Mindful of social distancing regulations, Mama Luigi’s only allowed cars in the lot by reservation. Restaurant staff sold and served food and beverages car-hop style—one vehicle at a time.

“It worked out well,” Hill said. “The idea was that people would stay in their cars; but some got out and started dancing—but only among themselves, among the people they came with.

“Really, shopping at Jewel or ALDI is scarier than anything that occurred in that parking lot,” Hill added with a chuckle. “It was well managed, and it was safe.”

Apparently agreeing were village officials in Bridgeview, who cruised by the site in response to at least one citizen call. The concert was allowed to proceed, and no citations were issued.

On the heels of the band’s triumph in Bridgeview, Ed Hill & The Unusuals may perform similar gigs elsewhere in the area. At press time, they were close to inking a deal to play on the roof at Irish Times pub and restaurant in Brookfield on May 29.

A representative of Mama Luigi’s called the event a success and said the restaurant is working on plans for additional concerts.

Ed Hill’s family has deep roots in the Clearing neighborhood. He is a great-great grandson of George Hill, who in 1909 established Hill Hardware—said to be the first business in Clearing, before the area was annexed by Chicago.
# # #
advertisement