The May CAPS meeting for the Eighth Police District’s Beats 815 and 821(see clickable beat map below) was held at St. Bruno School and was attended by about two dozen local men and women.

** Alluding to a concern raised at the April meeting, CAPS facilitator Michael Kovac stated that he was not aware of any new gang activity in Archer Park. He noted that a second video surveillance camera has been installed at a strategic location in the park and urged everyone to keep their eyes and ears open for suspicious activity.

** Local volunteers from the Eighth District's court advocacy program expressed frustration and disappointment over difficulty in bringing graffiti taggers to justice. Citing an instance where a young man had been arrested for tagging four businesses along 55th Street, they noted that two of the four business owners failed to appear in court. One said he would appear and testify, but then was a no-show at court; and the other business owner, when urged to attend the tagger's trial, allegedly told court advocates that he feared that testifying would lead to retaliatory tagging on his building---a position that Kovac said he viewed as "...ridiculous. I mean, come on. We're talking about some tagger with a can of spray paint, not some hardened mobster. God bless the two business owners who did show up. They were a couple of mom-and-pop businesses who did the right thing. The two no-shows were larger businesses that frankly should have known better," he said, declining to name the no-shows. "Look, we can have all the court advocates we want going over to 51st and Wentworth to demand justice for our community; but when the victims don't show up, the crimes won't be prosecuted successfully." 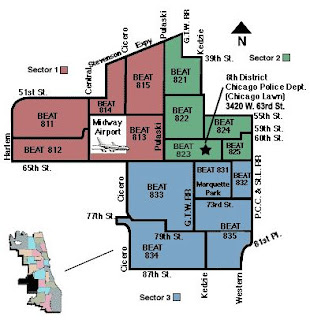 ** Court advocates also complained about judges at the Cook County Circuit Court First Municipal District courthouse at 155 West 51st Street, for alleged leniency in cases related to prostitution, and for a general lack of awareness of the seriousness of graffiti. "One judge told us that before he was assigned to 51st and Wentworth, he did not know that graffiti was a problem," Kovac added. "Well, I don't know where that judge lives, but it must not be in the city."

**  There was an update on efforts to address an alleged "nuisance" house near 49th and Knox. According to neighbors, the house contains multiple dogs and cats; and the house and backyard are loaded with garbage and feces that can be smelled from adjacent homes. Further, the owner of the house allegedly rents rooms in the house to boarders---at least one of whom is a suspected drug dealer, according to one person at the CAPS meeting. It was also noted that several neighbors on the block are watching the house and its occupants closely, including with binoculars, according to Archer Heights Civic Association Executive Director Thomas Baliga---who added that city officials are aware of the house and are using inspectors to pressure the home's owner to clean up the premises and bring the property into compliance with the law.

** A CAPS facilitator noted that Rendezvous Bar and Grill, 3500 West 47th Street, is now closed---and without elaborating, thanked Chicago Police. Rendezvous had been the subject of complaints by neighbors for multiple crime-related concerns, including possible gang activity and prostitution. An August 2011 online review by a Rendezvous patron, posted on an "ultimate strip club list" website, stated "After passing this place so many times I finally decided to check it out with a couple of buddies. On arrival security patted us down n charged us 5 bux at the door. The place was a bit crowded. There was 5 of us n only 3 of us got seats (had to take turns sitting down). We got a couple of modelos which were 5 bux each...While we were inside a gang member kept asking us what gang we were with. He was very annoying But seemed to be friends with security,thats the only reason I didnt punch him in the mouth because he was getting on my nerves. I wouldnt recommend going alone or if you don't know the area. The dances are $10 But the girls do some heavy grinding."

** There was a recap of recent action by city inspectors to stop a scheduled "rave" dance party from occurring at Club Karlov. (Details about the incident can be found in a Southwest Chicago Post news article posted on Friday, April 27.)

** A neighbor who voiced a concern at the April CAPS meeting about loud, late-night parties on his block, thanked police for their action. He stated that the parties, which appear to be in violation of city ordinances relating to noise nuisances, have gone away. Officers commenting on the situation reminded everyone of the importance of signing complaints in such instances. "We can come out and warn them about it," the officer said. "And they'll turn down the volume of the music. But then we drive away, and the volume goes right back up. If we have a neighbor willing to sign a complaint, that gives us the tool we need to take effective action."