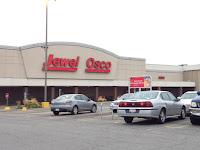 Pulaski at 8:54 a.m. Tuesday, Sept. 29 escaped after a foot chase that ended near 55th and Harding when he pulled a knife and cut a 26-year-old manager’s hand. The thief, who continued running south on Harding, was described as a Hispanic man age 30-40, wearing an orange shirt and black pants.

A 51-year-old Archer Heights man was robbed at gunpoint by a trio of men as he walked down a sidewalk in front of 4801 S. Springfield at 2:57 a.m. Monday, Sept. 28. The man told police he was walking home from work and that after the robbers took his cell phone and backpack, they sped away in a red SUV. He described them only as two black men and a Hispanic man.

A cashier who was momentarily distracted told police that a thief posing as a customer stole money from her register at Fair Share Finer Foods, 6422 W. 63rd St. He then ran out of the store and south through the parking lot. The crime was reported to police at 12:45 p.m. Wednesday, Sept. 30 but occurred about 48 hours before that, according to the CPD incident report. A store representative said that about $2,500 was stolen from the till, police added. The thief was described as a man (no race or ethnicity provided) age 30-35, about 6-foot-1 and 190 pounds with brown eyes, short black hair and a medium complexion.

Burglars forced open the service door of a garage near 58th Place and Central Park and stole a bicycle, a vacuum cleaner and an electric wheelchair. The crime was discovered by the victim, a 29-year-old man, at 8:15 a.m. Tuesday, Sept. 29. A neighbor’s surveillance video appeared to indicate that the burglars were two Hispanic men age 25, driving a blue Chevy pickup truck.

Burglars entered a garage near 70th Place and Lawndale and stole a snow blower and assorted tools. The crime was discovered by the victim, a 35-year-old man, at 3 a.m. Wednesday, Sept. 30.

Burglars entered an open rear window of a home near 69th and Keeler and stole an iPod. The crime was discovered by the victim, a 22-year-old woman, when she came home from work at 12:40 p.m. Wednesday, Sept. 30.

Burglars forced open the rear door of a vacant, bank-owned building near 52nd and Kedzie and stole a furnace. The crime was discovered by a 49-year-old man at 9 a.m. Thursday, Oct. 1.

Burglars entered a bedroom window of an apartment near 48th and Tripp and stole $600 cash, a checkbook, a DVD player, a pair of sunglasses and a bottle of perfume. The crime was discovered by the victim, a 28-year-old woman, when she came home from work at 2:15 p.m. Wednesday, Sept. 30.

Burglars entered a house near 81st and Scottsdale and stole a laptop computer, a video game console, assorted jewelry and several rolls of quarters. The crime was discovered by the victim, a 44-year-old woman, when she came home from work at 1:40 p.m. Wednesday, Sept. 30.