Reflections on the Eve of the 4th

FROM ACROSS THE great void of time itself, we can still 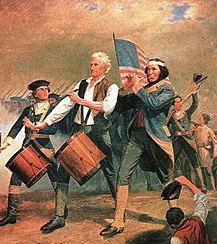 hear the words ever so clearly:  "John, do they have a 4th of July in England ?" At first the question seemed awfully easy and elementary. "No Dad, just in America" was the original and obvious response. But our Pop, the Late Clem Ryan (1914-74) quickly came back with, "Of course they do, a 3rd, a 4th, a 5th !" Dad's gag was very versatile and he would adapt it to just about every country on the planet; except those who also celebrated the 4th.

BUT OUR REFLECTION on this bit of family nostalgia brings up a very important point. Just what is all of the fuss about and what is behind all of this merry making ? We stay up late, we do our best to fill the atmosphere with about as much incendiary light, ear drum shattering noise and noxious fumes that we can. Some of our neighbors lay in a supply of firecrackers, sky rockets, roman candles and railroad flares that would rival all of the fire power aimed at Fort McHenry by the Red Coats during the War of 1812. And it is this that brings us up to the very reason for sitting before the old keyboard today.

AND THAT WOULD be and is most definitely the underlying motivation for whooping it up so enthusiastically on the 4th. Remember, the official name of the Holiday is Independence Day and is so named because it was on that date, July 4, 1776, that a group of brave, highly intelligent men from the 13 English Colonies of North America (outside of what is now Canada) presented to  His Royal Majesty, King George III of England and to the rest of the World their notice that they were no longer subjects of the Crown. They declared freedom and independence; which of course they knew they'd have to fight for.

BUT OTHER THAN just breaking from the British, our founding forefathers were sort of inventing a new sort of nation, governed, not ruled, by persons selected by the people at large. The process employed would be accomplished through a polling of the eligible voter, each casting just one ballot. Although this is a frequent occurrence in today's world, conducting such an election (or "Plebiscite" if you will) was virtually unheard of in the times that our founding fathers lived.

AND OUR HISTORY books will tell you that signing and presenting this Declaration of Independence was just the first step in establishing this political experiment we call the United States of America. Yes, we were to become truly "One Nation Under God, Indivisible"; but there were many steps that would have to follow.

THE FACT WE were incorporating 13 Sovereign States, whose existence was the result of every one having been established apart from the other by different parties, created in a sort of desire to maintain that singularity. Yet, there was a great movement to bring the former colonies together, to "federalize" them. It was this difference of opinions that led to the creation of our country's first political parties; those being the Federalists (favoring strong central government) and the Republicans (or Democratic Republicans) who backed stronger states rights and sovereignty.

THE RESOLUTION OF the differences of beliefs and in the visions of our country's government were resolved peacefully, if not always without heated debates. The result was the establishment of a national government functioning under the Articles of Confederation. The Articles provided a framework for the various states to work together and to give direction to the new land's future. From what we understand, the United States under the Articles of Confederation, bore more of a resemblance to today's European Union than to the "One Nation, Under God, Indivisible", which we all know.

THE ANSWER TO the failings of the Articles came first with an attempt to amend them and quickly became what we call the Constitutional Convention. Many of the same men, who had previously served as delegates to the Continental Congress during the period of the American Revolutionary War, also represented the states in formulating our Constitution. Issues were bitterly contested, in much the same way that our Nation's political differences persist today. But the Nation survived and prospered.  And that brings us back to the original business in this piece about why all the fireworks and ballyhoo ?

WELL, WE'RE DISPLAYING our enthusiasm for our country and for our good fortune in being blessed by the Almighty in being born in the Freedom of America. May this ever be so for our Children and theirs yet to come. This would make Dad very happy; and somehow we're sure that it already does!
~ ~ ~