By Tim Hadac
Managing Editor
Southwest Chicago Post
A neighborhood drive to feed elderly men and women in need—launched earlier this year as the pandemic still raged—continues to gather momentum even as COVID-19 starts to fade away.

That momentum was in evidence earlier this week at the popular Café 63 restaurant near 63rd and Narragansett, as nearly 20 volunteers packaged dinners that would be delivered to some 40 senior citizens in Clearing and Garfield Ridge.

There was no shortage of smiles as acclaimed Chef Dale Andrews brought out trays of freshly-cooked delights like Greek chicken and potatoes, green beans and more.

Quarterbacking the volunteers was 32-year-old Maureen Cronin, a Garfield Ridge native and alumna of Byrne School and Mount Assisi Academy. She founded the effort back in early February

“I know there are a lot of elderly people in the neighborhood who are alone,” Cronin said. “Their kids have grown and often have moved away. They may be in need but are too proud to ask for help—even from their own family members. That’s kind of where we come in. We provide them with a delicious meal every week.”

Cronin and crew typically purchase the meals from a restaurant in the neighborhood, many of which have struggled to keep their heads above water during the pandemic’s forced shutdown of indoor dining.

When the drive started in February, Cronin paid much of the costs out of her own pocket—no small feat for a working-class woman employed as a cook at Vince’s Restaurant and Pizzeria.

But as news of the weekly good deed spread, members of the Garfield Ridge Chamber of Commerce stepped up either to directly pay for the meals or run a fundraiser to generate assistance. Some of those business leaders are Geno Randazzo of All Exterior Contractors, Al Cacciottolo of First Rate Realty, Jennifer Tapia of First Rate Realty, Mary Ellen Brown of Midway Storage, Mike Riordan of Mike Riordan State Farm, Vanessa Garcia of Mike Riordan State Farm, Ericka Villegas of RE/MAX in The Village and Mick Kozy of Continental Sales.

In fact, Continental Sales footed the bill for this week’s meal, Cronin said.

Cronin credits Randazzo with being her “first inspiration to be selfless” since the beginning, keeping her steady and offering needed encouragement and financial assistance that helped carry her through weeks where she doubted if she could keep the effort going.

She also finds inspiration in Margaret Huitron, the Garfield Ridge girl who earned local praise last year when her lemonade stand in front of her family’s home was so successful, it raised enough money to buy cheerful, colorful facemasks for every child at Kinzie School. This year, the grade school student raised funds that actually paid the entire bill for a Wednesday meal for dozens of seniors.

Some of the volunteers at Wednesday’s event were from the Garfield Ridge Neighborhood Watch, as well as the Chicago Lawn (8th) Police District CAPS Office.

Makes a difference for seniors

Skeptics might say that the various social service agencies out there already can and do meet the need of hunger among the elderly. Cronin has a reply.

“With Meals on Wheels, you have to be homebound—and the people we’re serving may have a disability or some kind of mobility limitation, but they’re not technically homebound,” she said, adding that other agencies serving seniors have waiting lists.

Ninety-three-year-old Delores Bius understands the importance of the effort.

“I’ve lived in this neighborhood for 60 years,” she said. “I raised five sons here, but now I’m alone.”

A friend linked her with Cronin back in February, and she has been receiving a weekly meal ever since.

“I said, ‘Sure, I’d like a home-cooked meal once a week,’ because I don’t cook anymore,” she said, adding that Cronin “is such a sweetheart. Can you imagine doing what she does? I don’t know how she does it.”

Looking around her at the volunteers from different walks of life, Bius said the whole operation speaks well of Clearing and Garfield Ridge.

“This is the way a neighborhood ought to be, the way neighborhoods used to be in most other places, people looking out for each other,” she said.

Those interested in helping Cronin and crew—either through donations of funds or time—are encouraged to send an email to Gfr.ClearingSeniorMeals@gmail.com or call (708) 490-7595. 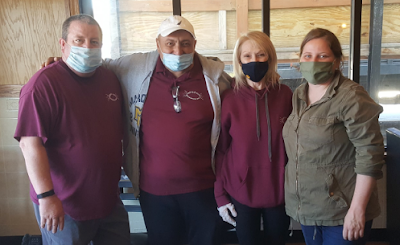 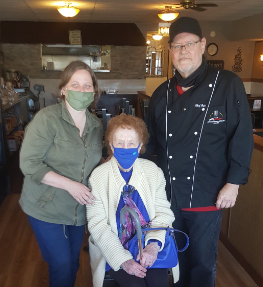