I'm ‘all in’ for the Salzburgs

By Joan Hadac
Editor and Publisher
Southwest Chicago Post
Next month--August 8, to be exact--would have been Tom Salzburg’s 56th birthday. Before the acclaimed rock musician could reach this milestone, ALS took his life in May 2020.
(ALS, or amyotrophic lateral sclerosis, is a progressive neurodegenerative disease that affects nerve cells in the brain and the spinal cord.)
You may recall the story I wrote about Tom in May 2020. Click here to see it.
The rumbling of motorcycles, a familiar sound to Tom, a 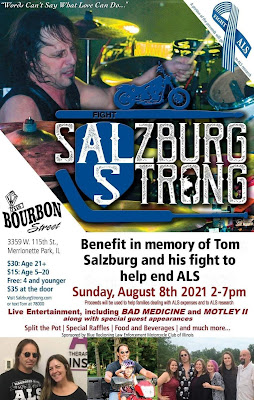 The ride will end at 115 Bourbon St., 3359 W. 115th St., Merrionette Park where the Salzburg Strong fundraiser in memory of Tom and his fight to end ALS (amyotrophic lateral sclerosis or Lou Gehrig’s Disease) will be held from 2 to 7 p.m.

For more information to purchase tickets for the fundraiser and/or Tom’s ALS ride, visit salzburgstrong.com, the Salzburg Strong Facebook page or email Sue or Jessica at salzburgstrong@gmail.com. 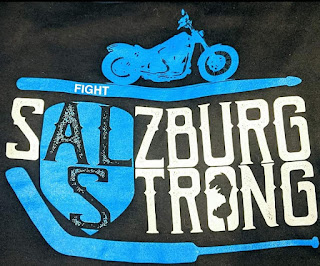 Volunteers are needed, as well, and those interested may get in touch with the family through the website, Facebook page or email address. (Those who want to donate directly to ALS TDI can visit fundraise.als.net/tomsalzburg.)
“This is one big party to celebrate his life and raise money for other families who are going through what we went through and a chance to raise money for ALS research,” Tom’s wife, Kelly, told me when I spoke with her earlier this month.

As with any party, there will be food and beverages, along with raffles, Split the Pot, raffle baskets and live entertainment. There will be two bands with a Salzburg connection.

Tom’s son, Tom Jr., plays in Motley II Also taking the stage will be Bad Medicine, a band Tom played drums in for 17 years. Tom was a longtime rock drummer and vocalist.

The fundraiser will benefit ALS TDI, other families fighting the disease and--if both Tom’s and Kelly’s families have their wish--Kelly will take part of the proceeds to pay down the debts incurred while Tom was fighting ALS.

ALS not only takes a huge emotional toll, but a financial one, as Kelly has experienced.

“One of Tom’s wishes was for me to keep fundraising for ALS research and awareness because ALS is a death sentence. There is no cure,” Kelly said.

When I spoke with her, she had just returned from a fundraiser for ALS TDI, a research facility in Boston. Tom and Kelly worked closely with ALS TDI while Tom was still alive. “It was a lifeline for us,” Kelly said.

Tom donated blood, tissue samples and whatever he could to help them find a cure, Kelly explained. “I’m all in” was Tom’s motto.
The pandemic had an impact on all the Salzburgs’ lives which included delaying the benefit, hosting fundraisers via the internet and handling funeral and wake arrangements after Tom’s death.

Instead of the traditional wake and funeral, Tom advised Kelly to have his remains cremated and to take the urn home “so I can be with you.” Kelly did.

The urn had to be as special as Tom, and it is. It may the only urn anywhere shaped like a motorcycle’s gas tank. 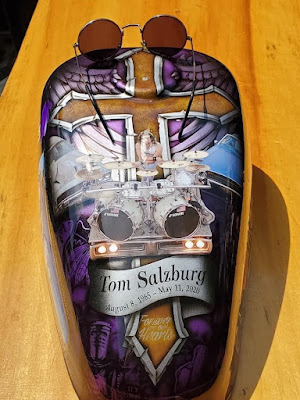 “Everything he loved was painted on the motorcycle gas tank,” Kelly told me. “Nothing but the best for my husband. He was the best human being.”
In a manner of speaking, Tom is with his family even now. Kelly has taken his urn on her travels. When guests drop by, the urn takes a place of honor. He will be with her on the motorcycle run and at the benefit. They will put his urn on the stage, a place he loved and was loved.

Tom didn’t want Kelly to lock herself in the house and stay there and grieve for him, she added.

“One of the most positive things I can do is help other people with ALS and their families and help raise awareness about ALS. I’m very passionate about both,” Kelly said.

I’m “all in” for the Salzburg family. I hope you are, too. 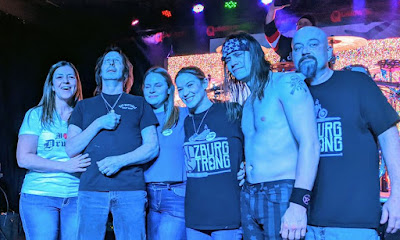