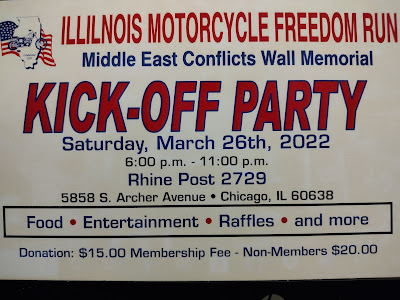 Dinner will be served at 7 p.m.

Admission is $20 per person. There will be food, raffles, a cash bar and live entertainment by classic rock cover band Rosie and the Riveters.

The annual run will be held on Saturday, June 18--starting at the Grundy County fairgrounds and ending at the Middle East Conflicts Memorial Wall in Marseilles.

The Wall has been described as a stunning tribute to all U.S. service men and women who have lost their lives in overseas conflicts from 1979 to the present. Each year, names are added to honor the sacrifices of those lost in the year before.

Currently, the Wall holds more than 8,000 names. This year, organizers will add the names of the 13 U.S. Military members who lost their lives in the final, chaotic withdrawal from Afghanistan.
The black granite Wall, brainchild of Tony Cutrano and Jerry Kuczera, was built with donated material and labor. It is said to be the first of its kind in the history of the United States to give honor to our fallen by name while a conflict is ongoing. The names on the wall represent fallen U.S. military members from such diverse locations as Panama, Lebanon, the Balkans, Grenada, Somalia, Haiti, USS Cole, USS Stark, terrorist attacks in Italy, Greece, Scotland and the current conflicts in the Middle East.

The annual run attracts as many as 10,000 motorcyclists—many from states outside Illinois, according to Clearing resident Bob “Cooch” Kuczera, a longtime run organizer and veterans advocate.
“The run itself is quite an event…but then the Wall—it’s awe-inspiring,” Kuczera said. “People come all over the see it, to leave mementos of their loved ones, to make rubbings of the names. It’s really emotional to see and talk with families so grateful that they know that they son or daughter, brother or sister, is not forgotten, that they will be remembered always.”

Volunteers will be matched with their interests and abilities, Kuczera said, often selling run-related merchandise to help raise funds to support the wall, said to be the only war memorial in the U.S. that was erected while a conflict was still underway.
# # #
advertisement