"The Concert For Moose" is Coming to the Toasted Chicken, and You're Invited

If you grew up in  (or anywhere near) the Clearing neighborhood, you've heard of the Hill family--or at least Hill Hardware, which was located at 6314 S. Central and was founded by George Hill in 1909.
Well, a member of the storied Hill family could use a boost right about now. Tom "Moose" Hill, a great-grandson of George Hill, recently was admitted to a hospital with a broken pelvis and hip, as well as other health concerns.
Moose grew up in Clearing, attending Fleming and Grimes grade schools, and then Hubbard High School.
So to cheer up Moose as he recovers, Moose's son, Ed (of the classic rock cover band Ed Hill & The Unusuals) is planning The Concert For Moose, an all-ages, family-fun gig at Toasted Chicken, 9750 South Roberts Road, Palos Hills, from 6:00 to 9:00 p.m. Friday, April 1. The idea sprang from the creative mind of Ed's wife, Kristy. 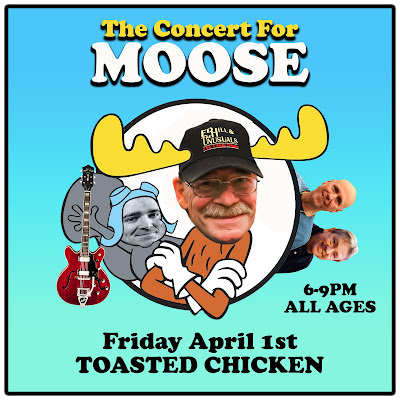 You are invited! No cover charge. Just stop by, look into the video camera that will be there, say a few words of encouragement to Moose (the video will be presented to him as a surprise). Then order some great, always fresh chicken (check out their menu at toastedchicken.com.)
And sit back and enjoy (or jump up and dance to) some great live music by a band influenced by the Beatles, Rolling Stones, Led Zeppelin, Elvis, Jimi Hendrix and others.

If Ed Hill & The Unusuals is a band name that sounds a bit familiar, it should. They're the guys who in May 2020, thwarted the pandemic for a few hours when they climbed atop the roof of Mama Luigi's in Bridgeview and rocked a crowd for three solid hours. Read all about it here.
So on April 1, let's stuff the Chicken for the Moose. See you there?
# # #
advertisement