By Tim Hadac
Managing Editor
Southwest Chicago Post
A 21-year-old Chicago Lawn man was charged with aggravated unlawful use of a weapon after he was arrested in the 3000 block of West 63rd Street at 11;16 a.m. Tuesday, April 12.
Jonathan Gutierrez-Custodio, of the 6400 block of South Richmond, allegedly was carrying a loaded handgun with an illegal laser sight, a CPD spokesman said.
Police stopped him after they said they saw him throwing gang signs as he walked down the street.
According to public records, Gutierrez-Custodio has been arrested three times by CPD since 2018.
He was arrested at 63rd and Whipple in October 2018 and charged with reckless driving, as well as driving at least 15 mph over the speed limit. He was arrested in January 2022 near 63rd and Kilbourn and charged with DUI and illegally transporting open alcohol. 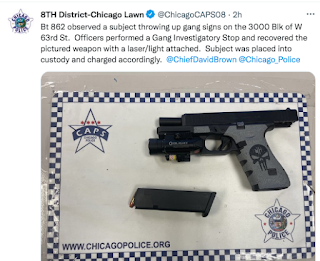 Police tweeted an image of the gun they say they confiscated.
# # #
advertisement