Press release from the U.S. Department of Justice/U.S. Attorney's Office/Northern District of Illinois:

"The Chief of Police in the village of Summit, Ill., corruptly accepted money from a local businessman intending to be influenced and rewarded in connection with the transfer of a liquor license to another individual, according to a federal indictment. 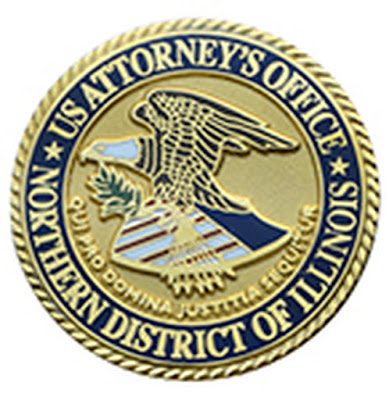 "The indictment returned Tuesday in U.S. District Court in Chicago alleges that Chief John Kosmowski conspired with a Summit building inspector to accept more than $5,000 from the businessman in 2017. The pair accepted the money, intending to be influenced and rewarded in connection with the transfer of a liquor license to another person, the indictment states.  Kosmowski allegedly received a cash payment from the businessman on March 23, 2017 and then gave the building inspector a portion of it.

"The indictment was announced by John R. Lausch Jr., United States Attorney for the Northern District of Illinois; Emmerson Buie Jr., Special Agent-in-Charge of the Chicago Field Office of the FBI; and Justin Campbell, Special Agent-in-Charge of the IRS Criminal Investigation Division in Chicago. The government is represented by Assistant U.S. Attorneys Tiffany Ardam and Jimmy L. Arce.

"The public is reminded that an indictment is not evidence of guilt. The defendants are presumed innocent and entitled to a fair trial at which the government has the burden of proving guilt beyond a reasonable doubt. If convicted, the Court must impose reasonable sentences under federal statutes and the advisory U.S. Sentencing Guidelines."
# # #
advertisement