Chicagoland Pony Rentals Saddles Up for Another Season in the City, Suburbs

By Tim Hadac
Managing Editor
Southwest Chicago Post
While the pandemic has contributed to the demise of a number of businesses on the Southwest Side, one has proven pandemic-proof. 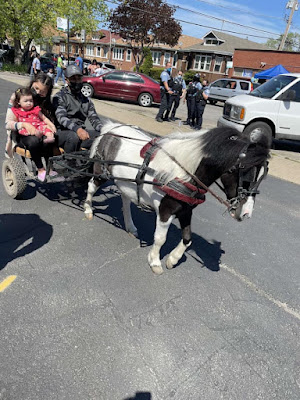 Two years after they launched their head-turning, smile-generating pony ride business, two Southwest Side teens continue to roll forward with their successful venture.

The service has brought a lot of happiness to people—little kids, as well as their parents and grandparents—because people just needed a break from the stress of [the pandemic] and they wanted something fun, something that reminded them of when they were kids.
"It" is primarily two 4-year-old ponies pulling small, two-seater carts down a sidewalk--something entirely unique to city kids, and a kind of fun throwback to perhaps a century ago, when it was not that unusual to see a pony in Chicago.

The teens are young entrepreneurs not far removed from high school--alumni of St. Rita and De La Salle. 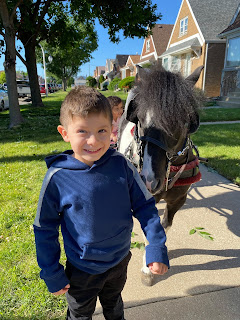 They started by cutting lawns and saved their money--and then saw that this kind of business—pony rides--had potential.
Their path was made easier by one of the teens' grandfather, an immigrant farmer with a spread in Frankfort that includes trained ponies and other livestock.

Their unique business—simply named Chicagoland Pony Rentals—offers rentals of the ponies and a petting zoo that can include Nigerian dwarf goats, as well as a dwarf pony and chickens.

For those looking to rent the ponies and/or goats for birthday parties, graduation parties or any event at all, the company offers different deals and combinations that can be tailored to meet any need. For example, one package includes two hours of pony rides plus a goat petting zoo for about $400. 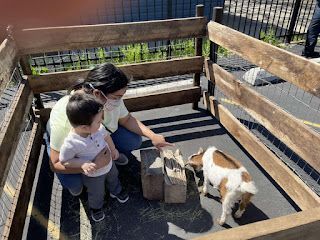 For those who want a more earthy experience, Chicagoland Pony Rentals offers a "day at the farm" package in Frankfort: three hours for up to 35 people. It includes pony rides around the farm, an expanded petting zoo, with tents, tables and chairs provided (you bring your own food and beverages)--all for about $550.

The carts the ponies pull can carry several children at a time. The ponies also can be saddled for rides by children, one at a time. 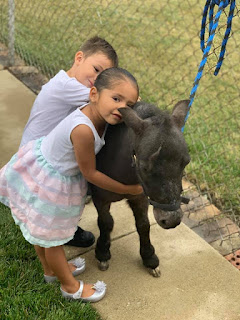 The baby goats are presented petting zoo-style, in a small pen.
The teens also clean up any mess the animals may make while they are at an event.

The teenagers see the venture as perfect for children’s parties and other festive occasions.

The animals are cared for humanely. The teens and others are at the farm daily, ensuring that the ponies and goats are well fed and have fresh water, and that they have access to veterinary care.
Those interested in more information on rental packages are advised to visit Chicagoland Pony Rentals on Facebook.
# # #
advertisement