A Fun (and Fast!) Way to Support All 23,000 Special Olympics Athletes in Ill.

By Joan Hadac
Editor and Publisher
Southwest Chicago Post
There are any number of fundraisers that benefit Special Olympics Illinois, but none is faster or more exciting than the Five-O at the Dirty-O, the annual stock car race at the famed Dirt Oval 66 racetrack (known to fans as the Dirty-O) in Joliet. 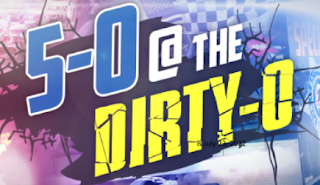 Five-O at the Dirty-O is a charity race featuring law enforcement officers from across the state, racing stock cars decked out to look like police cars.
This year's Five-O at the Dirty-O is set for Saturday, July 23. Want to be there in person? Gates open at 3 p.m., and a pre-event party starts at 4. The race itself starts at 7 p.m. For ticket information, visit dirtoval66.com/events-2/.

It's a lot of fun and 100% for Special Olympics Illinois.
Check out a bit of the 2019 event here:
But if you're not going to be there in person yet want to support the event (and therefore, support Special Olympics Illinois), you'll be interested to know that Chicago Police 8th District Commander Bryan Spreyne will once again be one of the drivers in the race.
Commander Spreyne is asking for support. All you have to do is make a donation to Special Olympics Illinois.
Each donation helps provide the more than 23,100 individuals with intellectual disabilities the opportunity to train and compete in Special Olympics competitions and programs in Illinois, free of charge.
Your donation will also help Commander Spreyne start a little closer to the top spot on the track, because race positions are determined by which driver raises the most funds.
Commander Spreyne grew up on the Southwest Side, near 61st and Kedzie. He attended Nazareth Lutheran School at 60th and Spaulding, then Ashburn Lutheran School at 83rd and Homan. From there, he went to Marist High School, graduating in 1991.
A self-described “car guy” who once considered a career as an auto mechanic, he has raced in Five-O at the Dirty-O before.
To visit Commander Spreyne's event fundraising page, click here.
And thanks for helping the Special Olympics athletes!
# # #
advertisement