Opinion
By Joan Hadac
Editor and Publisher
Southwest Chicago Post
When it comes to politics, the Southwest Side home where I grew up was just like the vast majority of other Southwest Side homes.
Democratic. Solidly Democratic.
So much so that it was unimaginable to leave the Democratic Party, let alone talk about it publicly or even think about it privately.
But then the unthinkable happened. The Democratic Party, the party of FDR and our grandparents, the party of President John F. Kennedy and our parents, began to leave us.
So what had been unthinkable became a "Well, maybe just this once" kind of situation in 1980, when a strong California governor ran against a weak Democratic president.
And when we voted Republican just that one time, political commentators called us Reagan Democrats.
To this day, I consider myself a Democrat. In primaries, I vote Democratic, but in general elections I long ago stopped voting along party lines. I vote for candidates, not party labels.
I'm not alone in what I just described.
The Southwest Side home where Kimberly Jagielski grew up was Democratic, solidly Democratic. Unthinkable to be anything but that.

But as Kim grew up--attending St. Bruno School and then Maria High School and then Saint Xavier University--the Democratic Party began to leave her.
So much so that in 2022, she is running for Cook County Board as a Republican and is asking for your vote in the general election of Tuesday, November 8 (or sooner if you are voting early). 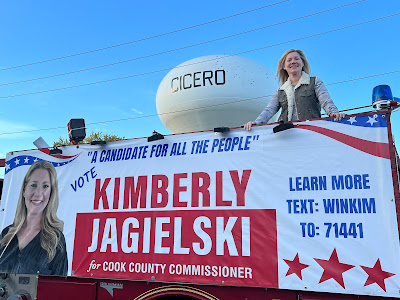 Kim is running for a four-year term in the 16th County Board District, which is mostly suburban but includes the northwest corner of Garfield Ridge (everything north of 55th Street and west of Central Avenue).
As noted in a recent article in a neighborhood paper, Kim describes herself as a “law-and-order candidate” dedicated to protecting the rights of law-abiding men, women and children.
The story continues:
As a single mother, she sent her son to St. Joseph School in Summit. He then went on to graduate from St. Ignatius College Prep and today is a college sophomore studying business.
Jagielski built a career in the Cook County Adult Probation Department, where she has served for the last 25 years. In that role, she has served in what are widely known as problem-solving (or specialty) courts, which work to help low-level criminal defendants suffering from an underlying mental health, social or substance abuse problem from becoming repeat offenders. Problem-solving courts achieve this goal by providing treatment and intensive supervision.

“I’ve seen how the criminal justice system can help people turn away from crime and turn their lives around, and I’m proud to be a part of that,” she said.
In 2022 she is running as a Republican against a Democratic incumbent, something once unthinkable in the Democratic home where she grew up.

On her campaign website (win-kim.com), she leaves no doubt on where she stands on crime.

“Over the last several years I’ve witnessed people getting probation who several years ago would have never,” she said. “People on probation committing violent crimes and be given low bonds. People on probation with several cases pending getting I bonds (no cash bonds). I am heartbroken as I watch the news daily and hear night after night more violence, robberies, and carjackings – businesses destroyed by looting and blatant thefts.

“As I watch in disbelief, thugs walk into a store and start grabbing items and walk out with no consequences!” she continued. “Who pays the price for their crimes? The store owners, fearful shoppers, and workers do, as politicians sit back and do nothing. It’s time to start holding people accountable for their actions, including politicians.”
Like a number of people, Jagielski has expressed strong concerns about the controversial Illinois Safety, Accountability, Fairness and Equity-Today (SAFE-T) Act, which among other things has abolished cash bail for people accused of crimes.

She described the act as something that may have started with good intentions, but became “frightening” in its final form, when it was passed by Democrats in the General Assembly in 2021.

Some in law enforcement are calling it the Anything But Safety Act, saying the law will turn public safety upside down.

Jagielski essentially agrees with that assessment, and added that beyond what she and others see as a flood of accused criminals turned loose on the streets, county government will face a huge logistical challenge to monitor those roaming free while awaiting trial.

Though crime and public safety are her main focus. Jagielski also is calling for the repeal of the county gasoline tax, saying motorists are “already paying too much at the pump without government making gas even more expensive.”

“I think a big question people need to ask themselves before they vote is, ‘Do you and your family feel safer now than you did four years ago?’ If you feel safer, if you think there’s less crime than four years ago, then vote for the incumbents. If you feel less safe, if you worry about crime getting out of control, then vote for the challengers who are dedicated to fighting crime and protecting innocent, law-abiding people.”

***
Well anyway, you get the idea.
Kim sounds like a lot of people--and I'd say the large majority of people--in Garfield Ridge.
That's not to say I have anything against the Democratic incumbent in the 16th District race. I don't. It's just that when it comes to issues I care about, he has been silent--at least as far as I can tell.
Kim Jagielski has not been silent. Kim speaks her mind and speaks up. She's a smart, strong, common-sense woman from the Southwest Side, the type we need in government.
She'll get my vote on November 8. How about yours?
# # #
Posted by Southwest Chicago Post at 7:22 AM