Consistent, assertive policing in the Chicago Lawn (8th) Police District---praised by many during the leadership of the late Commander John Kupczyk--- will continue throughout 2012, new Commander David R. McNaughton said recently. 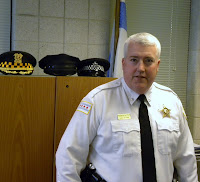 “Our whole structure is designed to reduce crime by setting priorities and intervening early and effectively,” he said. “We know what works, and we will continue in that direction.”
As an example, McNaughton talked about thwarting burglars and other thieves as a means of preventing more serious crime. “We know that a thug is a thug; and chances are, if he has no problem with stealing a car or burglarizing a home, he may have no problem---if he has a gun in his hand---of committing armed robbery or even murder. If we can catch these thugs early on---if, for example, we can take away their cars and get them off the streets---we can prevent a lot of serious crime down the road.”
McNaughton also pledged to maintain the current system of “beat integrity” that has proven popular in much of the district. In recent years, beat integrity has led to improved communication between neighborhoods and local police; and has meant a more consistent police presence throughout the district. In the years before beat integrity was implemented, people in the west end of the district often complained that their neighborhoods were poorly covered when CPD frequently flooded east-end “hot spots” with police resources.
“With some of the additional resources that the Department has provided to us in recent months, we have a rapid-response capability designed to address (hot spots); so we are well positioned to maintain beat integrity throughout the district.”
The new commander praised the Garfield Ridge Neighborhood Watch (GRNW) and similar crime-fighting groups in the area. “These groups, as well as the everyday efforts of individuals to be aware and report suspicious activity promptly, are very important to our overall strategy of reducing crime,” he added.

In fact, McNaughton will speak at the GRNW’s next public meeting, set for 7:30 p.m. Monday, March 19 at Valley Forge Park, 7001 West 59th Street. All Garfield Ridge residents are welcome to attend.
He urged everyone in the district to call 911 promptly to report suspicious activity. “A lot of crime that could have been stopped is not, if only because a neighbor who saw something is reluctant to call because they’re not certain that what they’re seeing is a crime. In a situation like that---if there is any doubt---pick up the phone and call right away. Let us decide what the response should be. We’ll take appropriate action.”
McNaughton grew up in the Jefferson Park neighborhood on the Northwest Side, graduating from Gordon Tech and DePaul University. He is one of 13 children of Norine and (the late) Robert L. McNaughton, a union plumber and Purple Heart veteran of the Korean War.
With more than 20 years of CPD service, Commander McNaughton is the first member of his family to serve as a Chicago Police officer---although he has two younger brothers who followed him onto the force, as well as two others who are Chicago firefighters.
Before his current assignment, he served as commander of the CPD’s Jefferson Park (16th) District for more than two years.
# # #
Posted by Southwest Chicago Post at 10:56 AM