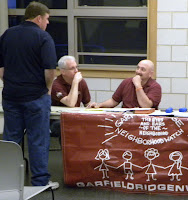 “Recently, I was at a CAPS meeting for Beats 831 and 832 (east Marquette Park), and there were just eight people from the neighborhood in attendance,” McNaughton said with a note of disappointment. “But tonight, I come here and it’s so crowded I almost couldn’t find a parking spot; and then inside I see a room that is not only full but overflowing into another room. It’s great to see this kind of involvement, and it shows that Garfield Ridge is in good hands."
﻿
﻿Most GRNW meetings in 2011 saw about 35-50 people in attendance, most of whom were GRNW members. Monday’s meeting was attended by about 60-70 people, the majority of whom were there for the first time.
“Wow! This is great,” said GRNW President Al Cacciottolo when dozens of hands were raised in response to a question about first-time attendees. “This is the kind of interest we need to continue to build this group and build a better and safer Garfield Ridge for everyone. If you want to get involved in your neighborhood, this (GRNW) is a great way to do it.”
McNaughton, the evening’s featured speaker, offered brief remarks and noted that “index” crimes (such as murder, shootings, robbery, burglary and theft) are at about the same level in Garfield Ridge as they were in 2011. He described that as a good news/bad news situation, and encouraged everyone to join with police in bringing the numbers down.

Because the meeting was running long, McNaughton cut his remarks short so he could field questions. One concerned a situation near 52nd and Normandy, where alleged gang members are renting a house and possibly using it as a base for criminal activity.
When one audience member expressed uncertainty about the people living in the house and whether or not they should call 911, McNaughton responded, “Let’s go from ‘maybe’ calling 911 to calling the police right away. When you do that, you help us build a record; and when we have that, it gives our officers cause to have suspicion and then take appropriate action. So please do not hesitate to let us know about a situation like that.”
“Gangbangers are like rats,” McNaughton continued. “They follow the path of least resistance. If they know the community will not put up with them, they will move on. They will leave."
McNaughton pledged to look into the situation closely and “call in” the house’s owner to ask about the rental.
Cacciottolo added that the GRNW is also aware of the situation. “We’ve handled situations like this three times already; and we’re working with the alderman on this one, too.”
There was also a brief discussion of graffiti that drew an emphatic response from Cacciottolo. “Look, if you see graffiti, particularly gang graffiti, you’ve got to report it right away. Don’t wait for your neighbor to do it. Because if graffiti is up there too long, the gangbangers know they’ve won.”
“We have to do all we can to squelch these gangbangers,” he added. “I always say it’s like a game of Whac-A-Mole. Whenever gangbangers pop up---Bam!---you’ve got to hit them fast. That’s what we’ve been doing in Garfield Ridge, and that’s what all of us need to keep doing."
Other matters discussed at the GRNW meeting included:
﻿
﻿ ** praise for the GRNW’s court advocacy efforts, in which local residents attend court proceedings to support local crime victims and witnesses and encourage judges to be tough on crime. Singled out for praise were Arlene White, Peg Forte, Cecelia Loan and Bernadine Buzzelli.
** an update on a court case involving a purported gang member who in 2009 beat a local teenager with a bat. The offender was convicted and is awaiting sentencing. (Editor’s note: a full story on this case will appear in the days ahead, at swchicagopost.com.)
** an update on successful efforts to fight companies that tape unsolicited advertising leaflets to garage doors.
** a request from a local woman that police take action against local teens who gather at the railroad tracks south of 59th Street and east of Valley Forge Park. The woman said the teens routinely get drunk, urinate in public and are a general nuisance. Police said they would investigate and respond.
** an update on GRNW efforts to assist a local homeowner of limited means who can’t afford to hire an extermination company to remove raccoons from an attic---after the Chicago Department of Animal Care and Control refused to remove them or provide a trap.
** a discussion of two recent residential burglaries and efforts to apprehend the offenders. In related comments, Cacciottolo urged everyone to attend a Chicago Police burglary prevention seminar set for 11:00 a.m. to 1:00 p.m. Saturday, April 21 in the first-floor auditorium of Daley College, 7500 South Pulaski.
Further, the Watch still maintains its toll-free telephone line (1-855-811-TIPS) for Garfield Ridge residents to report non-emergency situations relating to crime.
The GRNW membership roster stands at 77, although many more are supporters but not yet dues-paying members. Full details on how to join the group may be obtained by going online to garfieldridgenw.com or by attending the Watch’s next monthly meeting, scheduled for 7:30 p.m. Monday, April 9 in the underground facility at Wentworth Park, 5625 South Mobile.