Today's Parents Ruining Kids With "Too Much, Too Easy, Too Early," Speaker Says 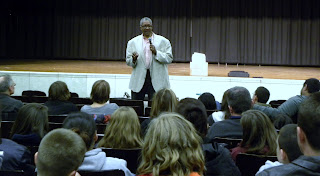 Parents today, overly permissive and indulgent of their children’s whims, are not only setting up their sons and daughters for failure but are jeopardizing the economic future of America, a nationally known motivational speaker told an audience of Southwest Side parents and children earlier this week.
“We give our kids too much, too easy, too early,” said Milton “Bigg Milt” Creagh. “Momma and Daddy, stop it. Absolutely stop it.”
Creagh delivered his straight-talk remarks to an audience of about 75 in the auditorium of Kennedy High School. It was his fourth presentation of the day, having spoken with larger audiences of students at several local public elementary schools.
Raised in the South Side’s Englewood neighborhood, Creagh drew contrasts between parent/child relationships of 40 years ago and today.
“Today, we buy kids crap all year long; and then at Christmastime we have to throw toys away just to make room for the new toys,” Creagh said. “When our kids are old enough to drive, we buy them cars. Not the kind of used cars we had when we were their age. We buy them new cars. Nice cars. Expensive cars.” 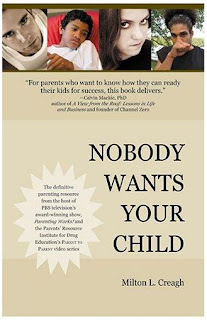 “Drive past most high schools today,” he continued. “Look at the faculty parking lot, and then look at the student parking lot. Which one has better cars? You guessed it. The student lot.”
“Momma and Daddy, there is something wrong with this country when a snot-nosed kid with no high school diploma, no college degree and no full-time job is driving a better car than his teacher---a person with a high school diploma, a college degree and a full-time job.”
Creagh stated that today’s parents are unwittingly raising the next generation to have unrealistic expectations about success in life. “When you give your child the best, you are starting them off at your level. But what they don’t understand is that mom and dad didn’t start there. It took mom and dad years to build themselves up to that point. But kids don’t buy into the concept of taking time and effort to build themselves up, because they weren’t taught that. They were taught they can have everything now. So when they go out into the world, they discover they can’t instantly recreate their parents’ level of income, so they feel like failures. That helps explain why 50 percent of your kids will end up living with you, as a dependent.”
Creagh chided parents who do not require their children to regularly do chores around the house; and parents who do assign chores, but pay their kids to do them.
“What we have produced in this country is a generation that is smart but lazy,” he said, “and that has very serious and negative consequences for our economic future.”

Noting the title of his new book (“Nobody Wants Your Child”), Creagh stated, “If you don’t teach your child to respect money and to budget money---and if you don’t teach your child how to work, no employer will want your child.”
He offered anecdotal evidence to argue that many employers in the U.S. today do not want to hire American-born teenagers of any race, preferring instead to hire immigrants who they see as having a much stronger work ethic.
“And beyond that, you know who employers prefer to hire these days?” he asked. “Senior citizens and people who are mentally challenged. Why? Because they are dependable. They show up on time, and they work hard.”
Creagh incorporated his own family history (his great-grandfather was a former slave who risked imprisonment and lynching in Georgia when he violated local laws against teaching African-Americans to read) as he discussed the importance of education as a tool of empowerment. He urged all parents to push their sons and daughters harder to “put in the hours” to succeed academically and become better citizens.
He also spoke out again cyber-bullying, its de-humanizing effects and sometimes deadly consequences.
Creagh’s visit to Chicago was sponsored and paid for by the Benevolent and Protective Order of Elks, as part of their national Drug Awareness Program (DAP). The Elks have partnered with Creagh to implement his “UR Choice UR Voice” training program to educate teens about the dangers of drug abuse and motivate them to make responsible and healthy choices in life. His talks on better parenting are designed to support the messages he delivers to teenagers.
“This is important work, and we are pleased to partner with Milt,” said Elks DAP Assistant Director Frank J. Burr. “He is a great speaker and motivator who makes a strong and positive impact on both students and parents. He fits in well with DAP, which is the largest voluntary drug awareness program in the U.S., and which reflects the Elks’ ongoing commitment to eliminating drug abuse.”
Creagh’s visit also was made possible through the efforts of Garfield Ridge resident Tina M. Haran, Illinois Elks Association convention coordinator and secretary of the Elks’ Oak Lawn Lodge 2254; and Kinzie School Principal Martin W. McGreal. Haran is the mother of a Kinzie student.

"We are grateful that Bigg Milt joined us today," McGreal added. "While his message about coddling children is blunt, he is also very supportive of parents who accept his challenge to set and enforce rules designed to push their sons and daughters toward lives as responsible, self-sufficient, successful adults."

"We are also grateful for all the Elks do with our local elementary schools---not only through their Drug Awareness Program, but through their work with Honor Flight Chicago, teaching students about the importance of supporting our nation's military veterans."


For more information on the Elks’ DAP, visit elks.org/dap.
# # #
Posted by Southwest Chicago Post at 11:58 AM