** Chicago Police Sergeant Allen Cain cautioned everyone about confidence artists who attempt to gain entry to people's homes by impersonating utility company employees. "If someone's at your front door and says they're from ComEd or People's Gas---and you didn't call them to come---chances are, they don't belong there. Don't hesitate to call 911 in a situation like that."

ComEd states that people can verify if a ComEd worker is in the area by calling 1-800-EDISON-1. ComEd also recommends that customers always ask to see a company photo ID before allowing any utility worker into your home or business; be skeptical of individuals wearing clothing with old or defaced company logos; and never pay on-site for services. ComEd employees never ask for cash payments, and ComEd employees do not engage in door-to-door sales or telemarketing. 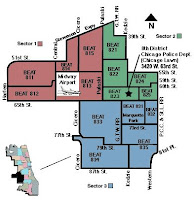 ** In general terms, Cain described the recent arrest of an 18-year-old Garfield Ridge man on strong-arm robbery charges as his "success story" of the month---prompting applause from the group and one person exclaiming, "We love our beat officers!" Cain did not name the man arrested or the specific location of the robbery, but details can be found in the Southwest Chicago Post's "Crime News Update" of June 17: 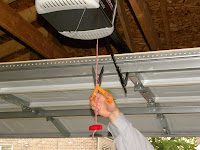 ** As part of a larger discussion of burglary, Cain recommended that, to thwart garage burglars, people cut (or tie back) the emergency-release cord on their overhead doors. "A burglar can get into your garage in literally seconds," Cain said. "They use a crowbar to push down the top panel of your overhead door. Then they take a long piece of wire with a hook, like a coat hanger, and they use it to reach your quick-release cord and pop the door open. And they can do it so quickly and quietly, you'll never know it happened. I know this because it happened to me."

Emergency-release cords are designed to allow manual operation of a garage door, in situations where the automatic garage door opener does not work (because it is broken or during an electrical power outage, for example).

To see how a burglar can break into a garage via this method, click this link:

(Editor's note: In the video example, cutting the cord would not have deterred the burglar; yet cutting the cord or tying it back can definitely reduce the risk of burglary. Another way to thwart this burglary method is to purchase and install a product like Gaplock 009, which can be purchased online or through local garage door retailers.)

** Responding to audience complaints about the City of Chicago's slow response to graffiti removal requests, Cain said that "the best way to stop graffiti is to get rid of it as quickly as possible" and noted that graffiti in the west end of the district is much less of a concern than in the east end; and that graffiti in the west end is mostly "tagger" graffiti unrelated to gangs---prompting one audience member to say to another, "So we're in better shape than the east end. So what? That's no comfort to me. I don't give a damn what's happening at 63rd and Rockwell. I care about my neighborhood, and I want to know why the city all of a sudden is not getting graffiti removed."

One audience member who said she is a member of the Eighth District's court advocacy program, reminded everyone of the importance of victims showing up in court on graffiti cases. "Look, police can catch a kid red-handed, with the can of spray paint in his hand. But if the victim doesn't show up in court, the kid walks. If it's your house or your garage or business that got hit, show up." As an example of victims failing to show up, she said that only two victims of the infamous SOAR tagger (said to have caused a total of $200,000 in damage to windows he etched across the city in recent years) actually showed up in court.

Editor's note: a little background on SOAR etcher and Southwest Side resident Eddie Garcia can be found here:

Cain added to the court advocate's observations by saying that graffiti victims may also send people to represent them, in cases where they are not able to attend court proceedings.

He also praised the court advocacy program as "unbelievable" and added, "As a police officer, I can't tell you how frustrating it is when you show up in court and there's no victim---nobody---there with you; yet on the other side, there's the offender with his entire family saying he didn't commit the crime. He was on his way to church, or he just got out of a Boy Scout meeting. But I'll tell you, when police turn around (in a courtroom) and see a row of those blue shirts (worn by Eighth District court advocates), it's a good feeling; and it lets the judge and everyone know the community is watching and the community cares."

Adding to the discussion, another audience member noted that victims who are afraid to go to court alone should know that court advocates will accompany them every step of the way, so that no victim is ever alone.

** Cain noted that recent crime statistics from Beat 811 may appear on the high side, if only because there was a recent fight at Kennedy High School in which 17 students were apprehended. Following up on that, a teacher at Kennedy asked Cain what the difference is between a gang and a crew. Cain responded by talking about the proliferation of gang factions, which he said make it more of a challenge for police to address gang crime.

** An audience member asked the Kennedy teacher about whether or not Kennedy students will be required to wear uniforms in the fall. The teacher noted that, on a trial basis this school year, students were not required to wear uniforms; and that she has not heard of uniforms being required for the 2012-13 school year. When asked her opinion on the matter, she expressed mixed feelings. "I prefer that they wear uniforms, but I am worn out from arguing with students over the rules. I became a teacher to teach. Not for this. And I'm tired of telling boys to pull up their pants because their boxers are showing," she said, to audience members' nods of agreement.

** Responding to complaints about youth-related crime at local parks, Cain said that police are paying special attention to parks. He said that in the previous month, a total of nine arrests and/or citations were made at Wentworth, Valley Forge and Stars and Stripes Park. In response, an audience member encouraged everyone to think before calling 911 about teenagers in local parks. "Most kids---our neighborhood kids---belong in the parks. We want them to use the park to play ball and other activities. We don't want you shagging kids who belong there. But if you see a very large group of kids just standing around and may be up to no good, then call 911," she said.

** An audience member reported that on her block, thieves had recently broken into three cars (one of which was locked; the other two may have been unlocked); and none of which was reported to police, because the owners said nothing appeared to be stolen. Cain expressed frustration upon hearing that. "OK, so nothing was stolen from those vehicles. But what about the next ones? Look, these crimes must be reported. We can't focus our resources where they need to be if we're not getting all the information we need."

Cain added, "I say this at just about every meeting. Lock your car doors---always. And don't leave anything inside that appears to have any value. Don't even leave your change where it's visible. They will smash your window for fifty cents. That's how bad it is. And don't leave your garage door opener in your car where it can be seen. That's an invitation for them to steal it. You do that, and you might as well hang your garage door key on your car antenna."

** An audience member complained about the annual detonation of illegal fireworks throughout the neighborhood, especially at Wentworth Park. Cain essentially acknowledged that most fireworks violations go unaddressed by police. He implied that such matters are relatively low priority compared to more serious matters. "It's tough enough to handle the crime we have, without going after every kid with a bottle rocket," he said and added that police will respond to calls of people with large caches of illegal fireworks. The audience member responded that police need to take illegal fireworks seriously---noting that every year, fireworks cause injuries and fires, "...and all the sulfur in the air is a public health hazard." Cain responded by stating, "Look at it this way: people shooting off fireworks at a park is less of a problem than if they were doing it on your block, by your house or garage."

** The National Night Out Against Crime is set for Tuesday, August 7, and there will be two observances in the Eighth District: one from 6:00 to 9:00 p.m. at West Lawn Park and another (hosted by the Clearing Night Force) at Hale School and Park (with a prayer vigil starting at 6:30 p.m. and a neighborhood motorcade starting at 7:00 p.m.)

** It was noted that the City of Chicago and faith- and community-based organizations will host a citywide Gun Turn–In event on Saturday, June 23, as part of ongoing efforts to get guns off the streets of Chicago. The citywide Gun Turn-In will be held at 23 churches throughout Chicago. Between 10:00 a.m. and 4:00 p.m., anyone can exchange a firearm, no questions asked, for a $100 MasterCard gift card. In addition, replica and BB-guns may be turned in for a $10 MasterCard gift card. In the Eighth District, the event will be held at the Chicago Islamic Center, 3357 West 63rd Street. Video ad about the event at: http://www.youtube.com/watch?v=S5uvkMSvYjM&feature=youtu.be