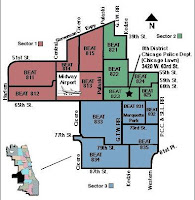 
Want to join your neighbors in a public show of strength against crime? Take part in the National Night Out Against Crime, which is set for Tuesday, August 7. There will be two observances in the Eighth District: one from 6:00 to 9:00 p.m. at West Lawn Park and another (hosted by the Clearing Night Force) at Hale School and Park (with a prayer vigil starting at 6:30 p.m. and a neighborhood motorcade starting at 7:00 p.m.) 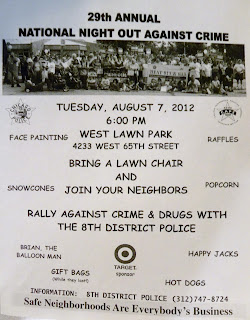 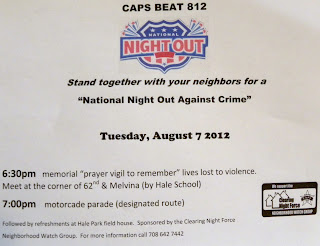 Burglars entered a house near 82nd and Tripp and stole valuables worth at least $10,000, according to the victim, a 64-year-old man.


The man came home at 10:00 a.m. Wednesday, July 25 and noticed his back door open. Stolen were two TVs, a CD player, assorted jewelry, a valuable fossil and the victim's extensive coin collection. Also stolen were the man's birth certificate, Social Security information, bank book and ownership titles to his motorcycle and SUV.

There was no sign of forced entry, and the man told police that he thinks he may have left his back door unlocked.

Four Southwest Side boys---three from Garfield Ridge and one from Clearing---were arrested for allegedly attempting to break into a garage near 53rd and Melvina at about 4:00 p.m. Wednesday, July 25.

An off-duty police officer said he was driving by and saw the boys pushing hard on the overhead door, in an apparent attempt to gain entry. They damaged the door but failed to get in.

They then left and were followed by the witness, who called 911.

The four were quickly apprehended. The 60-year-old man who owns the garage was away on vacation; police contacted his son, who lives nearby. The son called his father to alert him.

Three of the boys are 14 years old. The fourth is age 15. Two of the four live within a block of the garage that was damaged.

They were all taken to the CPD Eighth District Station for processing and then transported to the Juvenile Intervention and Support Center at 3900 South California. Police attempted to contact their parents. Two boys were later picked up by their mothers; one by his father, and one by his 20-year-old brother.

A 16-year-old West Elsdon boy suffered a broken leg when a man who accused him of stealing a bike rammed him with his car in a parking lot at 5160 South Pulaski.

The boy and a friend were riding bikes at that address at 12:40 p.m. Monday, July 23 when the car pulled up swiftly and pinned the victim against another car.

The man jumped out hollered, "Why you steal my bike, bitch?"

He took the bike, put it in his car and drove away.

The victim was taken by Chicago Fire Department ambulance to Mt. Sinai Hospital. His mother was notified by police.

The boys described the offender as a white Hispanic man, 19 years old, 5'8 and 170 pounds, short black hair and medium complexion. Descriptions of the car differed.

A 34-year-old West Lawn woman, described by the police as intoxicated, got into an argument with another woman and was struck in the face by a beer bottle on the sidewalk in front of the Studio 31 lounge, 5147 South Archer.

The boy claimed that an unknown offender walked up to him and asked, "Are you a gangsta? If not, gimme your stuff or I'm gonna punch you."

He then went home and told his 42-year-old mother, who called police.

The CPD incident report gave no description of the offender.


* * *
Burglars broke through the rear basement door of a home near 63rd and Kildare and stole a TV, a Sony PlayStation 3 video game console, a desktop computer, two watches, a purse and two bicycles.

A 26-year-old West Lawn man claimed that for the second night in a row, he was accosted by three people in a maroon, four-door Chevy Blazer who tried to run him down.

The incident occurred at about 2:30 a.m. Thursday, July 26. The victim claimed that he had gotten off a bus and was walking home, when the vehicle jumped the curb near 62nd Place and Hamlin and chased him down the sidewalk.

He described the three people in the vehicle as two white Hispanic men and a white Hispanic woman with strawberry blonde hair. All are in their mid-20s, and all three are members of the same street gang, according to the victim.

* * *
Burglars kicked in the front door of a house near 50th and Keating and stole two TVs, a camera, an iPad, a laptop computer, two Sony PlayStation video game consoles, and assorted jewelry.

The crime was discovered by the victim, a 32-year-old woman, when she came home from work at 4:00 p.m. Monday, July 23. A neighbor interviewed by police said she heard a loud banging noise at about 11:00 a.m., and then later saw a black SUV drop off a white Hispanic man at the address---but she did not call police.

* * *
A 42-year-old man from downstate Hoopeston was arrested for allegedly panhandling and then threatening a Chicago Police officer.

Police report that at 8:44 p.m. Wednesday, July 25, they saw Anthony Schneider walking in traffic near 56th and Harlem---making the sign of the cross and holding out his hand to motorists.

After his arrest and while he was at the CPD Eighth District Station for processing, Schneider allegedly became belligerent and hollered "Touch me and I'll kick you in the head!" and "I'll kill you!" to an officer.

In what police described as an ongoing feud between neighbors, a 59-year-old woman told police that one of her neighbors (a white man in his 20s) threw a dart at her, from his back yard to hers, near 62nd and Parkside. The incident reportedly occurred at about 2:45 p.m. Wednesday, July 25.