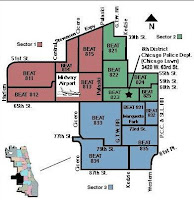 A 44-year-old West Lawn man was arrested at about 3:20 p.m. Thursday, September 20 after he allegedly burglarized a garage near 58th and Albany.

Douglas Lyen of 65th Place and Kilbourn allegedly entered the garage and stole a space heater, an oxygen tank and a folding chair.

The victim, a 54-year-old man, told police that as he walked out of his house, he spotted Lyen walking out the service door of the garage, carrying the items. He said he confronted Lyen, knocked him to the ground and held him until police arrived.

Burglars broke into a construction site at the Durkin Park School, 8445 South Kolin, and stole an estimated $30,000 worth of construction equipment belonging to two Elk Grove Village companies.

The crime was discovered at 6:15 a.m. Thursday, September 20 by a construction foreman who noted that a locked gate had been broken into.

Burglars pried open the back door of a home near 70th Place and Springfield and stole two TVs, a stereo, two Nintendo video game consoles, a PlayStation 3 video game console, three gold rings, a pair of gold earrings, two bank books, $60 cash and the ownership title to a 2002 Ford Explorer.

The crime was discovered by the victim, a 57-year-old woman, when she came home at noon Friday, September 21.

A burglar alarm apparently scared off burglars in a home near 72nd and Central Park, who only made off with a pair of gold earrings.

The alarm was tripped at about 11:45 a.m. Thursday, September 20. When police arrived on the scene to meet the 44-year-old victim, they saw three truck tire rims stacked under a rear window, which had been forced open.

Burglars broke through the side door of a garage near 53rd and Luna and stole two power saws, a hammer drill, a tile cutter, two nail guns, an air compressor and assorted hand tools.

Burglars used a brick to smash the window of the side door of a home near 69th Place and Springfield and then entered and stole a TV and a jewelry box filled with jewelry.

Two thugs followed a 20-year-old West Lawn woman for five blocks before punching her in the cheek and taking her cell phone.

The woman told police that she was walking home with her child from 71st and Kedzie at about 1:50 p.m. Wednesday, September 19 when she noticed two teenagers walking behind her.

When she and her child arrived at the intersection of 72nd and Central Park, the attack occurred. The criminals fled on foot, heading east in the alley between 71st and 72nd Streets.

Burglars pried open the service door of a garage near 62nd and Massasoit and stole a miter saw and a paint compressor.

A 23-year-old Chicago Lawn man was robbed at gunpoint in the alley behind the home of a known gangbanger near 72nd and Avers.

The crime occurred at 12:10 p.m. Monday, September 17. The victim told police he was walking north on Avers when a man approached and asked him if he is in a gang. The victim said he said he is not; and then was led into the alley, where he was robbed of his wallet and his cell phone.

Burglars broke through a gate near 60th Place and Oak Park and stole a truck and tools belonging to a local landscaping company.

Burglars kicked in the service door of a garage near 61st and Mayfield and stole a bicycle.