23rd Ward Streets and San Does It Again

At 1:23 a.m. Wednesday, November 7, we reported three instances of graffiti we had seen a short time earlier.

(We occasionally are out late at night, trolling for news, while other local news organizations nap.)

Each was on buildings adjacent to the alley running behind the north side of Archer Avenue. One was near Rutherford, two near Sayre. 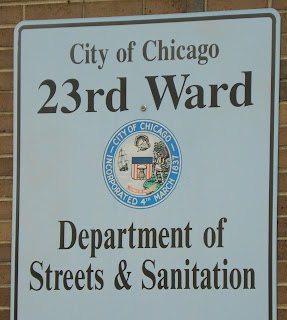 Within 12 hours, the Chicago Department of Streets and Sanitation's 23rd Ward crew had eradicated the worst one (a small gang marking); within 48 hours, the other two were not only removed, but freshly painted over in such a way that the property actually looked better than before.

This is exactly the kind of rapid response the 23rd Ward---and certainly all of Chicago---needs and deserves from city government. A response so swift and efficient, you actually feel good about paying taxes. (Well, almost.)

We at the Southwest Chicago Post tip our cap to everyone at the Streets and San 23rd Ward Yard. You are setting a new standard of public service excellence for others to emulate.