Acting on a tip, investigators identified Jose Gasco Garcia as being involved in a hit-and-run that occurred about 10:15 p.m. June 13 in the 5800 block of 73rd Street in Bedford Park.

Garcia, 28, of Chicago was arrested Saturday at his home in the 6300 block of South Francisco Avenue, by Chicago Police on warrant for attempted first degree murder and aggravated battery.

The victim, a man in his 30s, died Saturday, and Garcia subsequently was charged with first degree murder.

Garcia is scheduled to appear in Bond Court tomorrow (Tuesday) at the Bridgeview Courthouse.

Sheriff Dart reminds the public that the defendants are presumed innocent until proven guilty by the government in a court of law.

The offender is described as a Hispanic man,  5'6,” and 150 pounds with short hair. (sketch below) 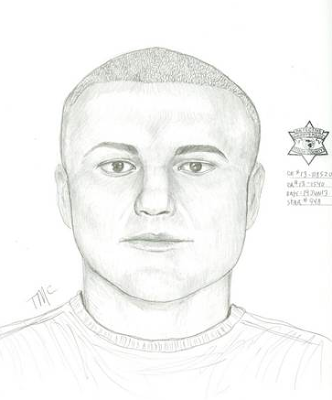 Released a short time ago by the Cook County Sheriff's Office:

BEDFORD PARK, IL -- The Cook County Sheriff’s Office, the South Suburban Major Crimes Task Force and the Bedford Park Police Department are seeking the public’s help in locating an older model, dark gray Jeep Grand Cherokee with front end damage that was involved in a hit-and-run at about 10:15 p.m. Thursday in the 5800 block of west 73rd Street that has left a man in his 30s in critical condition.

Anyone with information is asked to call the Bedford Park Police Department at 708-458-3388.