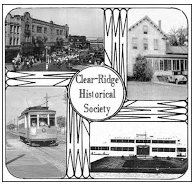 an interesting evening: the screening of a newly (and beautifully) restored print of a 1970 film ("Eight Flags For 99¢") that looks at the Vietnam War through the eyes of the Silent Majority--specifically, in Garfield Ridge.

Mark your calendars for 6:00 p.m. Thursday, September 12 and head over to the Garfield Ridge Branch Library, 6348 South Archer. Parking at the library is tight (as usual), so please arrive a little early.

The screening is open to the public. Admission is free, although donations are accepted.

If you remember Father Dubi from his time in the neighborhood (he was also known citywide for his anti-racism and environmental activism), you'll want to stop by and say hello.

Chicago Film Archives, The Garfield Ridge Library and the Clear-Ridge Historical Society invite you to a special premiere of this newly restored film ("8 FLAGS FOR 99 CENTS") about the home front during the Vietnam War. Father Leonard Dubi, who appears in the film, will be on hand at the screening to discuss the film.

"8 FLAGS FOR 99 CENTS" (1970, Mike Gray Associates, Chuck Olin, Joel Katz) was produced in response to President Nixon’s famous November, 1969 speech when he contrasted the unlawful and vocal anti-war protesters to the respectful “silent majority” who were in favor of remaining in Vietnam to fight communism. This film explores the thoughts and opinions of the “silent majority” represented by the folks living in the Garfield Ridge neighborhood on the Southwest Side of Chicago.

The commentary that arose from the Garfield Ridge community turned the filmmakers’ expectations (as well as conventional wisdom of the times) on its head. Expecting to record pro-war and pro-government slogans and sentiments, the filmmakers were caught somewhat off guard by the thoughtful, nuanced, and distressed analysis articulated by those that were interviewed and recorded. Contractors, firemen, mothers, fathers, barbers, Vietnam vets and clerks have varied and layered thoughts on America’s involvement in the war. One 20 year-old store clerk is most moving as she speaks with composure yet deep anxiety about the uncertain future her peer group is facing. Residents of all ages speak to the war in this film with very little evidence of hostility between generations, shattering another iconic image of those politically tumultuous times.

8 FLAGS FOR 99 CENTS scrambles stereotypical portraits from an era in American history that is remembered for its theatrical, abundantly vocal and sometimes violent unrest. This film presents an alternative and quieter picture of a community’s anguish in the face of an unpopular war. Residing in the very heart of middle America, 8 FLAGS FOR 99 CENTS signals the certain demise of a post WWII culture.

If you know of any one who may appeared in this 1970 doc shot in Garfield Ridge, please contact us at info@chicagofilmarchives.org or 312-243-1808 and let us know. We would really appreciate it!

8 FLAGS, along with another Chuck Olin film, A MATTER OF OPPORTUNITY (1968), were preserved thanks to a grant from the Nation Film Preservation Foundation (more on these two films, here). Endless thanks goes out to the NFPF and to Colorlab, who skillfully color corrected this 16mm film back to its original glory.