Just sharing a press release from the Hale Theatre Company. Sounds like some great local theater!

Three amazing plays will be presented over three weeks at 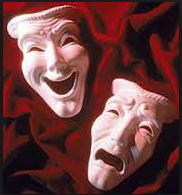 Opening this year's festival is the dramatic comedy "One Flew Over the Cuckoo's Nest, September 12-14, directed by Michael J. Murphy.

The second production of the festival is "The Maids", a quirky comedy written by Jean Genet, September 19-21, and directed by Dr. Kevin McSweeney, Artistic Director of the Munroe Park Theatre Guild.

Closing the festival is a bright and happy comedy, "The Hallelujah Girls", written by Jessie Jones, Nicholas Hope and Jamie Wooten, and is performed on September 26-28. The show is under the direction of Lauren J. Polenske, Artistic Director of The Hale Theatre Company.

Tickets are $8 for adults, $4 for students and senior citizens. All performances begin at 7:30 p.m. Tickets may be purchased at the Hale Park Fieldhouse Monday-Fridays from 2-7pm, and at the box office on the day of performance. To reserve tickets, call 773-229-1032 and ask for Michael or Lauren.