An 82-year-old Garfield Ridge woman was swindled out of more than $1,500 cash by two thieves posing as Water Department employees. The men came to the woman's house near 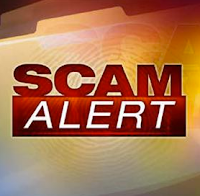 52nd and Nottingham at about 1:00 p.m. Monday, November 18 and said they needed to enter her basement to read the water meter. The thieves had no identification other than work vests, but the woman concluded they were legitimate and let them in.

While she was in the basement, one con artist ran the water in a basement sink (in an apparent attempt to muffle the sound of the other thief rummaging through the first floor of the home). After they left, the victim said she discovered $45 cash missing from her purse and $1,500 cash missing from her chiffonier.

The woman waited over 24 hours to notify police, because she said she was dumbfounded by the crime. Her description of the criminals was vague. She said they were both white men, with one described as Irish or Italian.

Two Garfield Ridge girls have been arrested and charged in the beating of a 35-year-old Chicago Lawn woman that occurred outside a gas station at 5900 South California at 12:30 a.m. Thursday, November 21.

The girls, a 17-year-old from 51st and Melvina and a 16-year-old from 59th and Narragansett, allegedly were part of a trio that pummeled the victim with fists, feet and a hammer. The third alleged assailant was Javier Tamayo, 22, of suburban Burbank, said by police to be an admitted gangbanger.

The victim told police that shortly before the beating, Tamayo had ordered her away from the gas station by allegedly saying "This is my hood. We run this" and threatening the victim with getting "popped" if she did not leave.

Police said the victim sustained injuries in the beating that included quarter-sized red marks under her left shoulder blade. They recovered a hammer from the scene, although it was not clear which individual hit her with the tool. The victim refused medical attention and left the scene before police could question her further.

live in Beat 813 or 833 (see map), come to West Lawn Park at 7:00 p.m. Tuesday,
November 26. Hear updates on crime in your neighborhood and learn how you can work with neighbors and police to make the community safer and better for all. 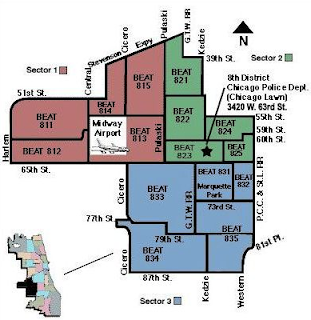 Home invaders struck a residence near 64th and Natchez and stole $100 cash, as well as a 2006 Infiniti automobile.

The crime was discovered by the victims, a 38-year-old man and his wife, when they got out of bed at 4:45 a.m. Wednesday, November 20 and saw their back door open. The home invaders also reportedly severed the home's phone/cable line and removed several knives from the kitchen and placed them on furniture at several places throughout the residence.

Police said the stolen vehicle was recovered behind an apartment building at 6300 West 63rd Street and that it was returned it to the victims.

A trio of thugs robbed a 30-year-old Clearing man as he parked his car in his garage near 63rd and Austin at 7:06 p.m. Wednesday, November 20. They entered via the service door, flashed a pistol and made off with $540 cash, running away westbound on foot before jumping in a blue SUV and speeding away east on 62nd Street.

One is described as a black man age 20-25, 5'10 and 120 pounds, brown eyes, medium complexion, black hair in a "fade" style, wearing a gray hoody and tan pants. The other two are described as white Hispanic men age 20-25.

A shoplifter pulled a knife on a worker at a store in Ford City Mall, although police did not say which store was struck or what merchandise was shoplifted. The crime reportedly occurred at 5:40 p.m. Thursday, November 21.

After a struggle, the thief reportedly dropped the merchandise, ran outside and fled on a bicycle west through the mall parking lot. He is described as a white Hispanic man 5'7 to 5'8 and 170 pounds, brown eyes, fair complexion, and black hair in a comb-over style, wearing a red-orange puffy jacket, blue jeans and tan boots.

A 25-year-old West Elsdon man told police he was robbed at gunpoint as he walked down a sidewalk near 49th and Lawndale at 3:30 p.m. Wednesday, November 20. The victim said the offender initially appeared to be nothing more than a man asking for a cigarette. After the victim gave him one, the offender followed him, pulled a pistol and demanded money.

The victim surrendered his cell phone and $20 cash, and the offender ran away west on 49th Street. He is described as a black man age 20-24, 6'3 and 200 pounds, brown eyes, black hair, medium complexion, wearing a brown hoody with a blue vest, blue jeans and a black baseball cap with white lettering on it.

A 15-year-old West Lawn boy told police that he was robbed at gunpoint as he walked home
from school down a sidewalk near 65th and Springfield at 3:50 p.m. Wednesday, November 20. After the offender pulled a pistol, the boy surrendered his cell phone and a pair of red and black Nike Air Jordans. The offender was described as a black man age 25-27, 6'3 and 180 pounds, wearing a blue jacket and having a tattoo on the back of his right hand. 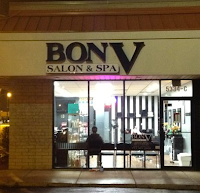 a TV. Police were alerted to the crime by an alarm that sounded at 5:18 a.m. Friday, November 22.

A 33-year-old Clearing woman told police that someone had thrown her jacket on the floor and taken her car keys, residence keys and driver's license while she slept in her rented condominium unit near 64th Place and Melvina. She said she made the discovery at 6:15 a.m. Friday, November 19.

Police said there was no sign of forced entry.

Burglars forced open the rear door of a home near 62nd and Kolin and stole a tennis bracelet. The crime was discovered by the victim, a 38-year-old woman, when she came home from work at 4:15 p.m. Wednesday, November 20.

Burglars entered a garage near 65th and Kolin and stole a floor jack, two jack stands, and a car battery charger. The crime was discovered by the victim, a 47-year-old man, when he came home from work at 6:30 p.m. Tuesday, November 19. There was no sign of forced entry, police said. 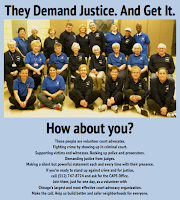 Burglars forced open the service door of a garage near 55th and Kilbourn and stole a tool box filled with tools. The crime was discovered by the victim, a 62-year-old woman, at 5:00 p.m. Thursday, November 21.

Burglars entered the back door of a home near 59th and Kildare and stole a laptop computer, a tablet computer and assorted jewelry. The crime was discovered by the victim, a 44-year-old man, at noon Thursday, November 21.

He told police that he had left his home for only a short time and that when he arrived, he saw the offenders fleeing in a gray Chevy Malibu heading east on 59th Street. One burglars is described as a black man age 40, 5'8 and 160 pounds. The other is described only as a white Hispanic man.