Hundreds of military veterans came to the Des Plaines Valley
VFW Post 6863 in Summit today to receive free groceries, as well as a pat on the back and even blessings from a minister--all part of the Illinois Motorcycle Freedom Run's Fifth Annual Veterans Food Drive. 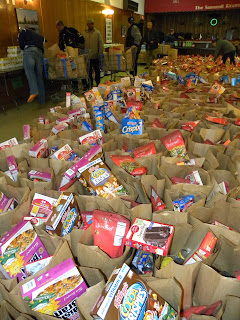 According to founder/organizer Mike Cozzi, this year's drive will feed nearly 700 veterans for Thanksgiving with not just a turkey, but bags of groceries donated by a number of businesses and individuals.

The event has grown every year, Cozzi observed, saying that the first year's goal was to feed 15-20 vets but wound up providing food for 109.

A small army of about 300 volunteers of all ages, grade school students to retirees, helps make it all happen--everything from people sorting, assessing, packing, driving, greeting and much more.

Cozzi was inspired to launch the annual drive when he saw the plight of veterans. "It amazed me that veterans who are returning from service overseas were unable to find work, were struggling to provide the bare necessities," he said.

He added that the drive typically serves "veterans who are unemployed or on some other kind of hardship," he said.

Some of the vets “wonder how we got ahold of them because they thought they were forgotten. These are individuals who have struggled all along and are living off their disability [checks] or Social Security or retirement from the military, and that’s what they’re limited to. To be able to do something like this, to have such a magnitude of support from the community so we’re able to provide an extensive meal for them, really means a lot.”

We at the Southwest Chicago Post tip our cap to everyone who volunteered and/or assisted in any way to bring a little sustenance and a lot of brightness into the lives of veterans in need this Thanksgiving, and that includes the Des Plaines Valley VFW Post 6863 for once again donating the use of their facility---which, we are told, meant forfeiting a Friday fish fry, a lucrative event for the post.

Some people are good at giving lip service to veterans; but at 63rd and Harlem today, where the rubber meets the road, hundreds of regular folks proved that they'll never forget and are grateful for the sacrifices made by veterans.

Want to help with next year's efforts or other worthy causes? Check out ILMFR.org today.

Byrne School eighth graders (from left) Angelica Kalafut, Kyra Geissler, Eve Stromidlo and Emily Dryden were among the many volunteers who assisted in the effort to bring food and good cheer to veterans this Thanksgiving.