A pair of thugs robbed Ted's Jewelers, 5334 South Archer, at 6:20 p.m. Friday, December 13. According to the owner, a 45-year-old woman, and a witness, a 45-year-old Burbank man, the two criminals entered with a revolver and baseball bat. The owner and witness immediately fled toward a back entrance while one of the thugs smashed a display case with the bat.

The pair made off with assorted jewelry before fleeing on foot, east toward Kilpatrick. They were described only as black men. The owner and witness told police that shortly before the crime occurred, a third man was in the store. He made a modest purchase and was seen talking on his cell phone several times. The moment he left, the two robbers entered before the door could close--thus circumventing the door's buzz-in lock. The customer is described as a black man, light complexion, wearing a dark blue cap and a puffy jacket over a hoody.

An 86-year-old woman was robbed as she sat in her apartment at the 87-unit Senior Suites of Garfield Ridge, 5839 South Harlem. The crime occurred at 5:44 p.m. Wednesday, December 11. The victim told police that she was working a crossword puzzle when someone walked into her apartment, grabbed her from behind and said "Give me all your money or you will die."

The robber stole $300 cash and fled in an unknown direction. The victim sustained a scratch on her forehead, but refused medical attention, police said. The robber is described only as a black woman. Detectives are said to be reviewing security video footage.

live in Beat 811 (see map), come to Good Shepherd Presbyterian Church at 7:00 p.m. Tuesday, December 17. Hear updates on crime in your neighborhood and learn how you can work with neighbors and police to make the community safer and better for all.

He said he was approached by two thugs, one of whom brandished a knife and said "Give me your wallet and phone." The victim said he had neither, but surrendered his wallet and phone when the robbers moved towards him in a menacing manner. The offenders are described as white Hispanic men age 20-25, 5'8 to 5'9 and 200-215 pounds, olive complexion. 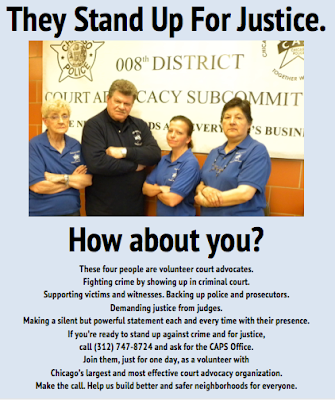 A 51-year-old South Side man told police he was robbed by a pair of thugs as he delivered packages near 67th and Hamlin at 2:00 p.m. Monday, December 9. He said he was standing next to his work van when two men approached. One had his hand in his pocket and said "I got a gun. Step aside or else."

A 40-year-old South Side woman told police that a girlfriend robbed her of $120 cash as they were partying at the Crossroads Hotel, 5300 South Pulaski. The crime reportedly occurred at 10:51 p.m. Monday, December 9 when the girlfriend slammed her head into a wall and grabbed the cash from the victim's pants.


live in Beat 813 or 833 (see map), come to West Lawn Park at 7:00 p.m. Tuesday, December 17. Hear updates on crime in your neighborhood and learn how you can work with neighbors and police to make the community safer and better for all.

A 24-year-old West Lawn man told police he was robbed as he walked down a sidewalk near 62nd and Kilbourn at 5:10 p.m. Tuesday, December 10. He said that three men jumped out of a black minivan and grabbed him, with one saying "Shut the f~ck up or I'll kill you." They stole his cell phone and $5 cash before jumping back in the minivan and speeding away north on Kilbourn.

They are described as white Hispanic men age 20-29.

Burglars smashed the front glass door of the Boost Mobile store at 6950 West Archer and stole about 200 cell phones and $100 cash. The crime occurred at about 6:15 a.m. Thursday, December 12.

Burglars forced open the service door of a garage near 60th and Keeler and stole a ladder and assorted tools. The crime was discovered by the victim, a 30-year-old man, when he came home from work at 7:30 p.m. Wednesday, December 11.

Burglars forced open the rear window of a home near 54th and Hamlin and stole a laptop computer, a jewelry box and assorted jewelry, an amplifier and a total of $2,200 cash. The crime was discovered by one of the victims, a 24-year-old woman, at 3:00 p.m. Thursday, December 12.

Burglars kicked in the back basement door of a home near 67th and Komensky and stole assorted jewelry. The crime was discovered by the victim, a 31-year-old woman, when she came home from shopping at 3:20 p.m. Thursday, December 12. A witness described the offenders as two white Hispanic men age 18-21.

Burglars smashed the front window of a residence near 59th and Lawndale, entered the premises and broke a vase in the process--but nothing appeared to be stolen, according to the victim, a 42-year-old man, who discovered the crime when he came home at 2:00 p.m. Thursday, December 12.

Burglars forced open the rear window of a home near 59th and Kildare and stole a laptop computer. The same burglars most likely forced open the overhead door of the garage on the property, stealing a lawn mower and assorted tools.

A 22-year-old woman told police that someone entered her second-floor apartment near 64th and Central and stole a small safe that contained $100 cash and a check for $107. The crime occurred while the victim was at work and was discovered by a relative at 5:00 p.m. Friday, December 13. There was no sign of forced entry, and the victim gave police the name of a person she suspects of committing the crime.