Burke, along with Aldermen Ariel E. Reboyras (30th) and Willie B. Cochran (20th), will introduce an ordinance banning the cases on Monday, July 27, according to a press release from Burke's office.

If the ordinance is passed and signed into law, Chicago will be the first major city in the nation to outlaw the sale or possession of the product, Burke said.

The “gun grip” cases, which could be mistaken by police officers for an actual weapon, are new to the market and are made by a number of foreign manufacturers.

“Whether this case is sticking out of your pocket, or being held in your hand, it could be confused by law enforcement officers as a firearm,” Burke said. “Allowing these cases to proliferate in Chicago would be a threat to public safety and almost certainly lead to a tragic event. We must act now to ban this outrageous product and make it illegal in the city.” 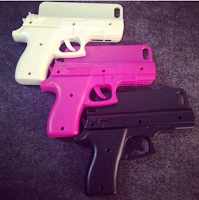 Not only police officers, but Chicagoans legally sanctioned to carry concealed weapons, could find themselves reacting “in split seconds” to what they thought was a dangerous situation, Cochran said. “Carrying a cellphone case that simulates the appearance of a gun is asking for nothing but trouble,” he concluded.

“I don’t see these novelties being anything but dangerous,“ agreed Dean Angelo, president of the Fraternal Order of Police, who endorsed the measure. “The only thing you see when someone is carrying this in their waistband is what seems to be a weapon, which is going to put an officer on a heightened level of self-protection.

“If I were on the street and approached an individual with one of these in their waistband or pocket, my weapon would be out. I would not take the chance that this is not a real gun,” Angelo added.

the product as “a terrible idea” and begun warning consumers not to buy the cases. The cases come in colors including black, white and pink, many of which are imported from Asia.

“Anything that looks like a real gun should not be in the hands of anyone out there,” Reboyras said. “It can be construed as the real thing.”

The proposal will be formally introduced directly to the Committee on Finance on would also prohibit other products shaped like guns, such as lighters or cameras. Violators would face fines of up to $750 per offense.

Introduction of the measure marked the second time in the past ten years that Chicago officials have enacted curbs on fake weapons. In 2005, Burke won adoption of a measure which imposed fines on anyone who sold, purchased or possessed fake “military-style weapons.”
# # #