A drive-by shooting near 58th and Pulaski just before 1 a.m. Tuesday, Sept. 22 left a 21-year-old man fighting for his life in Advocate Christ Medical Center in Oak Lawn.
Police said that the man was shot in the head by a man in a passing car. Moments before he was hit, the victim reportedly shouted gang slogans and threw a can at the vehicle’s occupants. The victim was said by a source to be a gang member.
In connection with the incident, police detained a 28-year-old man near 63rd and Whipple. As of Wednesday morning, no charges had been filed. 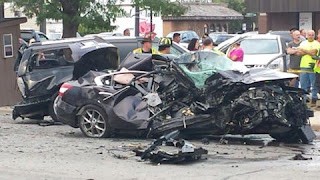 car blew a red light at 55th and Austin and caused a 12-car crash on Austin, just south of Archer.

Humboldt Park resident Brandon Wolf died at the scene, shortly after 4 p.m. Three other people in different cars were transported to hospitals for injuries that were said to be non-life threatening.
Wolf, whose Facebook page indicates his is originally from Park Forest, will be waked in a closed-casket visitation Friday at Leak & Sons Funeral Home in Country Club Hills. Burial will follow a funeral Mass on Saturday at St. Lawrence Church in Matteson.

Three people described by police as admitted gang members were arrested in a disturbance near Hubbard High School, at 62nd and Hamlin, at 3:20 p.m. Tuesday, Sept. 15. Police assigned to patrol the school area near dismissal said they stopped a vehicle blaring loud music. When two women in the car were ordered out, one of them—Tia Tabo, 19, of 73rd and Bell—allegedly threatened police by hollering, “You better get ready to catch a body! CPDK!” The other woman—Brielle Lyles, 19, of Oswego—allegedly hollered, “CPDK! I’ll kill you if your b~tch ass touches me” and then spat in the face of an officer, according to the police report. In connection with the incident, a 16-year-old boy was apprehended after he harassed police by saying, “We got this all on camera. We fight you over here. F~ck you all, CPDK!” (CPDK is a street acronym used by some to claim that they are killers of or are willing to be killers of Chicago police officers.) Lyles was ordered held without bond and was set to appear in court on Sept. 24.

Burglars forced open the service door of a garage near 49th and Komensky and stole a lawn mower, a took box with tools and assorted disc jockey equipment. The crime was discovered by the victim, a 35-year-old woman, at 6:30 a.m. Tuesday, Sept. 15.

A 37-year-old Orland Park man told police he was almost run over by a disgruntled former co-worker in the parking lot of Locke Transportation, 7101 S. Kostner, at 7:05 p.m. Wednesday, Sept. 16. The suspect, identified as a 31-year-old Riverdale man, allegedly became angry when he was asked to return items belonging to the company. As he sped away, he reportedly hollered, “I will kill your mother!” at the victim. The suspect remains at large, according to police.

A 23-year-old man told police that a quartet of men robbed him as he walked down a sidewalk near 63rd and Keeler at 2:20 a.m. Wednesday, Sept. 16. The team of bandits used a fifth person—a woman—to district the victim while one bandit pulled a gun. The victim surrendered his cell phone, wallet, debit card and debit card PIN before the bandits sped away in a black truck. The victim later learned that the robbers used his debit card and PIN to withdraw $108 from his bank account. All five were described as black, with one man described as 5-foot-9 and 200 pounds and another as 5-foot-10 and 145 pounds.

A 66-year-old man was robbed at gunpoint as he walked from his car to the entrance of Chase Bank, 4730 W. 79th St., at 10:10 a.m. Wednesday, Sept. 16. Stolen was the man’s black duffel bag, which contained several checkbooks, personal papers and an uncashed retirement check. The robber fled north in an alley and is described as a black man age 20-28, 6-foot-2 and 240 pounds, with brown eyes and black hair, wearing a white jacket and black pants.

Burglars smashed the glass of a rear door at Oil Express, 6001 S. Pulaski, and stole $7 from a cash register. The crime was discovered at 2:30 a.m. Wednesday, Sept. 16 when an alarm was triggered.

A 72-year-old woman told police that someone stole her winter clothes from her apartment at Senior Suites of Garfield Ridge, 5839 S. Harlem. She said she discovered the crime at noon Sept. 2 but did not report it for two weeks. There was no sign of forced entry, police said.

Burglars entered a vacant house near 52nd and Austin and stole two toilets, two vanities, a sump pump, a stove, copper pipes, drywall and flooring. The crime was reported to police on Monday, Sept. 14 by a representative of a California-based property management firm.