Get Outside, Get Active, Get Busy, Cops Tell Garfield Ridge Residents

Garfield Ridge residents who want to keep their 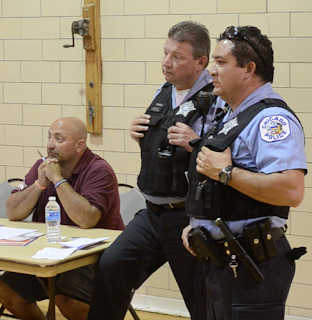 neighborhood one of the safest in the city need to be more assertive and make themselves more visible—day and night—two frontline police officers said Monday.

“Get outside and enjoy the neighborhood,” said Officer Chris Barajas, as he used recent classic car shows on Harlem and Archer avenues as an example of what some call “positive loitering”—law abiding people filling local streets, sidewalks, parks and other public places to basically crowd out gangbangers and other hoodlums.
“You know what? Pick a night—once a month, like on a 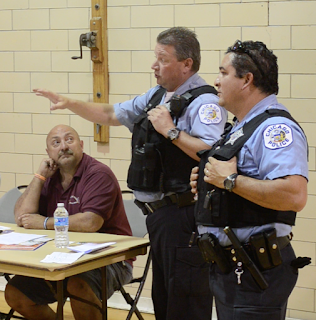 Wednesday--and go hang out in one of the [parking] lots with your friends and your classic cars,” Barajas said. “I don’t care if you bring a cooler, we’re not going to bother you.

“It’s a good thing, because now there’s [law abiding] eyes out there,” he continued. “Jiffy Lube or the [Archer Heights] Credit Union or Dunkin’ Donuts, whatever.”
Barajas noted that people don’t sit on their front porches like they did a generation or two ago, so “having eyes on the street is that much more important.”
Barajas and Officer Mark Eldridge—who patrol parks across the Eighth District—were the featured speakers at the Garfield Ridge Neighborhood Watch’s monthly meeting, held in a gym at Kinzie School. About 60 men and women attended.
GRNW President Al Cacciottolo agreed with the officers and noted that he is encouraged by the large number of people in Garfield Ridge who walk streets, sidewalks and parks to get physically fit.
He said that Archer Avenue in Garfield Ridge is safer today than it was years ago, and getting out and getting active “is a way to keep it that way. It’s a good way to show punks that we care about our neighborhood and we’re the ones in control.”
Cacciottolo poured praise on Barajas and Eldridge.
“They grew up here, they went to school here, they live here…I call them ‘our utility guys’ because they are phenomenal, and they are everywhere. They busted the Subway [sandwich shop] robber, they busted the guys stealing catalytic converters. These guys are awesome.”

Barajas thanked GRNW members and others in the community for their ongoing support of police.

“We know who’s on our side, and we appreciate it. In fact, we need it more than ever now,” Barajas said. “It’s vital.”
He contrasted the pro-police mood in Garfield Ridge with the adversarial relationship police often have elsewhere.
“When we do traffic stops or street stops, depending where we’re at, people come out and put the phone on us,” Barajas said, referring to people who use their cell phones in an attempt to capture video of police wrongdoing. “We’re not even out of our cars, people have their phones on us. But it actually worked on our behalf a couple of times.”
Barajas suggested that to counter the effects of people who record police in such a manner, law abiding citizens should fight fire with fire.
“If you see us out there on a traffic stop, on a street stop—you know what? Come on out. Be nosy. Do the same thing,” he said, suggesting that law-abiding citizens turn the tables by using their cell phones to record police in action—or to capture footage of people taking video of police.
“And yours won’t be edited,” quipped Eldridge, alluding to how some people trying to make a case against police twist and distort footage.
“When they see that you’re taking video, too, that will eventually make them stop, because now they’re being challenged [with the truth],” Barajas added.
Echoing what Eighth District Commander James O’Donnell and other CPD speakers have said repeatedly, Eldridge urged everyone to “call 911 first” if they see a crime in progress or are even suspicious of something that could be become a crime.
“We can’t help unless you let us know,” Eldridge said to a woman who complained about a trespassing incident she witnessed but admitted she did not call police. “Call 911, 911, 911. Make the call, m’am.”
The next GRNW meeting is set for Byrne Elementary School, 54th and Oak Park, time and date to be announced.