Police have opened a homicide investigation into the traffic-related death of a Gage Park man early Sunday morning, but they are not yet saying if they think the killer knew the victim—or if the crime was a road-rage incident between strangers.

Eduardo A. Pena, 21, died at 4:44 a.m. at Stroger Hospital, about 2½ hours after his 1998 Ford Ranger was rammed behind by a black pickup truck near 55th and Kedzie and pushed two blocks south—where it hit a tree near 57th and Kedzie.

The driver of the pickup truck sped away and is not in custody. On Friday, October 27, CPD released video of the start of the incident. It shows both vehicles at the stoplight at 55th and Kedzie, facing south. The video clip ends with the pickup truck ramming Pena's vehicle.

Pena was extricated from his mangled vehicle by paramedics.

He leaves behind a wife and year-old child, according to relatives who have organized an online GoFundMe campaign to pay for his funeral expenses. As of Tuesday afternoon, seven people donated a total of $1,340 toward the $7,000 goal.

Pena’s cousin, Klarissa Lopez, said the homicide “breaks my heart into millions of pieces,” and she has publicly appealed for witnesses to share information.

“Please, if anyone knows anything, come forward!” she wrote in a Facebook post. “To drag a man two whole blocks and then to leave him to die...you're a special kind of sick and u deserve to rot in prison. I pray every minute they live, their conscience hunts their minds

The fatal clash began steps away from the entrance to St. Gall Church, where parishioners outside Mass last Sunday expressed shock and sadness.

“There is already so much evil in the world. Do we need more?" asked Josefina Parada, mentioning the funeral service held for a Gage Park family in the church in 2015, after they were slain in a home near 57th and California. “There’s so much to live for. Why are people killing each other?”

Maria Rodrigues-Campos said the killing illustrates “why I don’t drive at night. There are too many young drivers—hotheads—out on the road at night. You look at them the wrong way and who knows? Maybe you’re the one they’re running off the road.”

Pedro Ortiz said he is confident that police will be able to find the killer.

“With so many video cameras around these days, you know some camera somewhere has footage of that pickup truck making a getaway, he said. “Plus you know police will be looking for that truck, which has damage no other truck in the city has. Just a matter of time.”

Those with useful information to share are encouraged to call CPD Area Central detectives at (312) 747-8380. 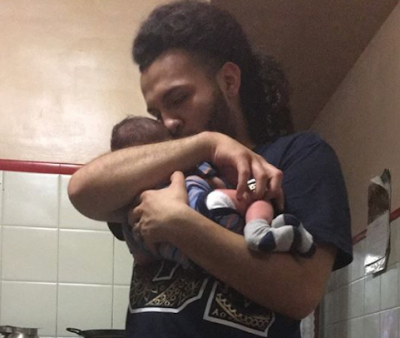 Pena with his infant son, from a photo posted publicly by his relatives.
# # #