Football star charged with carjacking, kidnapping, robbery
An 18-year-old Ashburn man known as a star offensive and defensive player for the Goode STEM Academy Knights football team has been arrested and charged with armed vehicular hijacking, armed kidnapping and armed robbery. Jakeith Anderson was arrested at his home in the 3700 block of West 82nd Street at about 3:45 p.m. Wednesday, April 4. Police said that on Monday, March 26, Anderson and others approached a 24 year-old man who was in a vehicle in the 2900 block of South Canal and forced him into the rear of the vehicle at gunpoint. Anderson and the others then allegedly drove the man to an ATM and forced him to withdraw cash. Anderson was ordered held without bond and is due in court on Wednesday, April 11. According to public records, Anderson was charged with threatening a Goode STEM teacher or other employee in February of this year.

Want to work directly with Chicago Police to prevent crime in your neighborhood? If you live in Beat 812 (see map), come to the Clearing Branch Library, 6423 West 63rd Place, at 7:00 p.m. Wednesday, April 11 and attend your monthly CAPS meeting. Hear updates on crime in your neighborhood and learn how you can work with neighbors and police to make the community safer and better for all.

Bust Ashburn man on Red Line robbery rap
A 23-year-old Ashburn man is due in Cook County Circuit Court on April 27, held without bond and charged with two felony counts of armed robbery and one felony count of robbery. Denzel J. Boykin, of the 3200 block of West of 85th Place, was apprehended at his home at about 5 p.m. Sunday, April 1 after police said they identified him as an offender involved in three armed robberies that occurred on the 1600 block of North Clybourn on March 30, between 12:45 and 1 a.m. Police added that during two incidents a weapon was implied and property was demanded from the victims, 19- and 41-year-old men who were aboard a CTA Red Line train. During a third incident a 22 year-old man was struck in the face and received treatment at the scene.


Elderly man shot in shoulder
A 72-year-old man was shot in the shoulder as he sat in a vehicle parked in the 3000 block of West 52nd Street at 5:27 a.m. Sunday, April 8. According to police, the victim was the target of the shooter. The elderly man was taken to Mount Sinai Hospital, where he was listed in good condition. No one is custody, and police offered no description of the shooter, who was said to have walked up and fired at the victim.

Man shot in Gage Park drive-by
A 24-year-old Gage Park man was shot in the lower right leg as he walked down the street in front of 5600 S. Campbell at 11:06 p.m. Sunday, April 8. The victim told police he had just been dropped off by acquaintances near 56th and Artesian when he saw a beige SUV make a U-turn and head towards him. As it neared, two men inside hollered, “What’s up, n~gga?” and fired three shots at him. The SUV then sped away south on Campbell. The victim was later transported by CFD ambulance to Mount Sinai Hospital, where he was listed in good condition. The shooter and driver were described only as Hispanic men.

Fiance’s ex shot him, Parkview man says
A 36-year-old Parkview man—said by a law enforcement source to be a documented gang member--was shot in the right arm as he took out the trash in the alley behind his home in the 3900 block of West 85th Street at 6:54 p.m. Thursday, April 5. The victim told police that the offender is a West Lawn man who is the former boyfriend of the victim’s fiancé. The shooter fled on foot west, then north. The victim gave police the name of the former boyfriend. Police said they were questioning a person of interest.

Reputed gang member’s girlfriend shot in head
A 25-year-old Chicago Lawn woman suffered a graze wound in the back of her head when she was shot while riding in an SUV with her boyfriend—a 28-year-old Chicago Lawn man—at 5:15 p.m. Saturday, April 7 in front of 6100 S. Francisco. The victim told police that her boyfriend—described by police as a documented gang member—was driving when another vehicle started chasing them. The shooter then pulled a black revolver, leaned out a window and started firing, hitting the victim’s vehicle. When the shooting started, the victim ducked down but felt pain in the back of her head. Her boyfriend drove her to Holy Cross Hospital, where she was listed in stable condition. The shooter was described as a Hispanic man wearing a white T-shirt. His passenger was described as a Hispanic woman wearing a red shirt. Their vehicle was described as a newer model, white Chevy Malibu.

Bus driver attacked, suffers eye injury
A 32-year-old CTA bus driver suffered a detached retina when an angry passenger threw coins in her face during an altercation on a bus at 7833 S. Western at 9:12 p.m. Sunday, April 8. The victim told police that the passenger refused to pay his fare. When she told him he had to pay, he called her a b~tch and said, “You trippin’.” When the driver said she was calling police, the offender then threw the coins. The victim was transported by CFD ambulance to Holy Cross Hospital, where she was listed in good condition.

Charge Cicero teen with domestic battery
An 18-year-old man from suburban Cicero was arrested and charged with domestic battery, as well as criminal damage to property, in an incident that reportedly occurred in the 5100 block of South Melvina at 3:45 p.m. Sunday, April 1. Angel Reyna, of the 3100 block of South 53rd Avenue, is due in court this week to respond to the charges. Police said that Reyna was arguing with a 22-year-old woman when he allegedly pushed her into a wall, grabbed her by the neck and hit her in the face. The victim refused medical attention, they added. According to public records, Reyna was charged with criminal trespass to land last October after he was arrested in the 5100 block of South Meade.


advertisement
Want to meet Hall of Famer Dan Hampton?
Want to win a helmet signed by the Danimal?
Click here for details! 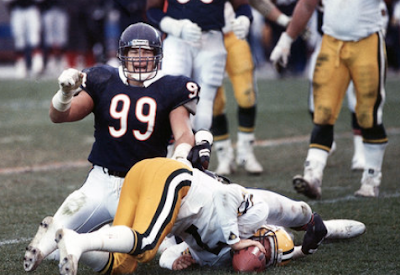 Bust man on weapons charge
A 24-year-old Chicago Lawn man was arrested and charged with reckless discharge of a firearm outside his home in the 3500 block of West 65th Place. Ricardo Gonzalez was apprehended after police responded to a ShotSpotter report of five rounds fired at the address. Police said as they approached Gonzalez and another man in front of his home, he fled inside. As they pursued, they reportedly saw five spent shells in the gangway next to the home. When police entered the home through an open back door, they encountered Gonzalez—reportedly pointing a cellphone at them and taking video. He denied shooting a gun. Police said they then searched the premises and confiscated a .45 caliber Ruger handgun with an extended magazine and an open box of ammunition. According to public records, Gonzalez has two past arrests from 2015: one for reckless conduct at his home on 65th Place and another for obstruction of a roadway by a non-motorist near 55th and Menard.

Teen couple shot with paintballs on 79th Street
A 16-year-old Scottsdale girl and a 16-year-old West Lawn boy were shot with paintballs as they walked together down a sidewalk in front of 4232 W. 79th St. at 4:18 p.m. Sunday, April 8. The victims told police that the shooter fired from a black, four-door vehicle headed west on 79th Street. The boy was struck in the neck and chest—suffering a minor cut and bruising on his neck. The girl was hit in the chest but was not injured. The girl’s mother arrived on the scene and refused medical care for both. There was no description of the shooter.

Construction tools swiped from garage
Burglars kicked in the service door of a garage in the 5800 block of South Neenah and stole about $5,000 worth of construction tools. The crime was reported by the victim, a 35-year-old woman, at 8 a.m. Thursday, April 5. It was discovered three hours earlier by a neighbor who saw the garage’s overhead door open and contacted the victim.

Garage burglar flees when alarm sounds
A burglar forced open the service door of a garage in the 5100 block of South Keating and rummaged through an SUV parked inside. The crime occurred at 2:28 a.m. Thursday, April 5. The burglar fled when he triggered an alarm. The victim, a 41-year-old woman, reported the crime to police eight hours later. It was initially unclear if anything had been stolen, and the victim shared video with police.

No sign of forced entry in West Lawn heist
A 31-year-old West Lawn man told police that his home in the 6100 block of South Kolin was burglarized some time after 10 a.m. Thursday April 5. He said when he returned from work later in the day, he noticed that his TV, Playstation 4 video game console and a speaker were missing. Police said they saw no sign of forced entry at the home.