Southwest Side aldermen are not characterizing it as a showdown, but a number of disgruntled homeowners see it that way.

The “it” is a joint meeting of the City Council Committees on Finance and Aviation, set for 6:15 p.m. Monday, September 10 in the auditorium at Kennedy High School, 56th and Narragansett. The public is encouraged to attend.

On the agenda is a single item for discussion: the Chicago Department of Aviation’s Residential Sound Insulation Program, which has earned the ire of hundreds of Southwest Side—and some Northwest Side—homeowners who have received defective windows and doors, most of which emit noxious fumes that many say may be toxic.

“Every homeowner with these defective windows and doors 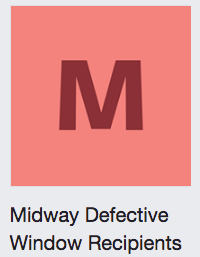 should attend—and bring five neighbors, too,” said Chrysler Village homeowner Pam Zidarich, a co-founder of the Midway Defective Window Recipients advocacy group. “You may have RSIP windows right now, and you don’t see anything wrong with them—but how do you know they won’t start breaking down next year or three years down the road?”

Expected to attend is newly appointed Chicago Department of Aviation Commissioner Jamie Rhee. A question to her office to confirm her attendance went unanswered this week.

CDA officials will be provided with questions in advance to ensure that they have ample opportunity to formulate a substantial answer, 13th Ward Ald. Marty Quinn said recently. On a handful of occasions in the last year, CDA officials asked questions about RSIP often claimed to not have the answers at their fingertips and pledged to get back to those asking the questions.

“But then usually, we’d hear nothing in response or what they’d get back to us was so lacking in details that it basically made no sense,” said Anne Prevenas, MDWR’s co-founder. “Hopefully, we’ll finally get the answers we have deserved all along. If we don’t, the Department of Aviation has absolutely no excuse.”

There are seven questions in all that the two City Council committees have given to Rhee. Each question typically has sub-parts. They are available in their entirety below.

As first reported 15 months ago when four Chrysler Village homeowners stepped forward to tell their stories, the crux of the matter is RSIP windows and doors emitting foul-smelling (and possibly toxic) fumes.

As word spread of the defects, literally hundreds of homeowners near Midway and O’Hare have stepped forward to report that they, too, have RSIP windows and doors have defects—most with the “burning plastic” odor, some with serious and even dangerous mechanical defects that appear to have been caused by the windows breaking down over the years as they are exposed to the elements—sunlight, heat, cold, wind, rain and snow.

Earlier this summer, the Chicago Department of Aviation announced that the odor is not coming from government-supplied sound insulation windows and doors—but from screens that go along with them.

Further, laboratory tests paid for by city government have found no evidence of a hazard to human health, CDA officials claimed.

An ongoing concern of many of homeowners with Residential Sound Insulation Program windows and doors is that the fumes emitted are more that an annoyance—and they have produced anecdotal evidence to suggest a link with respiratory illnesses, particularly in children living in the homes.

The Midway Residential Sound Insulation Program​’s goal, according to a statement on the Chicago Department of Aviation’s website, is “to make it easier for the highest impacted homeowners surrounding Midway to talk on the phone, watch TV, listen to music, sleep, or have a conversation in their own homes. By properly sound-insulating these homes, homeowners not only gain a quieter interior, but may also benefit from long-lasting improvements and increased efficiency in their heating and cooling systems.”

Since the program was launched in 1996, some 10,173 homes near Midway have been sound-insulated, CDA officials note, as well as 41 local schools.

RSIP homeowners with questions or concerns are advised to call the Midway RSIP office at (773) 838-5632.


Questions for the Chicago Department of Aviation
for the September 10, 2018
joint meeting of the
Committees on Finance and Aviation


1) Has the CDA, through its respective RSIP programs, halted the installation of windows and doors until a final determination has been made as to all the causes of the “odorous window and door issues"?

2) Regarding the overall testing processes, we would like to know the following information:


B) Pursuant to the ordinance that amended Chapter 2-20 of the Municipal Code of Chicago, Section 2-20-050 authorized the CDA to conduct the screening of all windows, storm doors, vinyl patios doors, wood prime doors and any other product installed pursuant to the Midway and O’Hare Residential Sound Insulation Program that have been reported to the Department as emitting odors, to date, how many homeowners have contacted the Midway and O’Hare RSIP programs to request an inspection?


C) How many homes have been inspected?  How are these inspections conducted?

F) Also under Section 2-20-050 of the Municipal Code of Chicago, the CDA is mandated to immediately perform in-house testing on a minimum of ten percent of the confirmed cases of houses with odors issues after the initial screening. The homeowners shall be provided with copies of the final testing report by the City once the report has been completed.

1) To date, in how many homes has the CDA performed in-home testing for air quality?   What is the time frame to achieve the figure of 10% of the confirmed households to participate in the in-home testing?

2) Of the homes that have been tested, how many home owners have received the final report on their homes’ testing results?

G) Pursuant to the ordinance that amended Chapter 2-20 of the Municipal Code of Chicago that authorized the extension of the warranty period of windows, storm doors, vinyl patio doors, wood prime doors and any other product installed pursuant to the Midway and O’Hare Residential Sound Insulation Program for a   period of ten (10) years for each product:

1) What is the CDA’s interpretation of the warranty extension ordinance?

2) Has CDA communicated this change to the respective RSIP programs?

3) Finally, has the CDA created a plan or entered into a contract with an outside vendor to make the necessary repairs/replacements to the “odorous doors and windows?”

1) To date, how many windows and doors have been tested in your labs?  Have you tested both double hung and crank out windows? Are they testing just the windows and doors, or are they including the sashes, and other components that were included in the original installation?

2) In the most recent chamber testing why did the test stop at 149 degrees?

3) Will further testing include exposure to UV rays and extreme heat?

4) What is correlation between the heat and the degradation of the windows?

3) Since the design/specifications for the windows and doors for the Residential Sound Insulation Program come from the FAA, has the City notified the FAA that there are problems with the windows/doors that are installed through this program?

A. If the City has notified the FAA, when and what has been their response to the odor issues with the windows and doors?

B. If the City has not notified the FAA, when does the Department plan on doing so and why has CDA waited so long?

4) Now that the City’s experts have determined that the screens, coated with PVC, are one of the sources of the odor coming from the windows, will the specifications/design of the new windows and screens be altered to rectify these matters?

A. Has the CDA reviewed other city’s window soundproofing specs?

B. Keeping with the topic of design and specifications, will the specifications for storm doors be changed now that some are being confirmed to also have the odor issue?

5) Throughout this process of determining whether a household has windows and doors with “odor” issues, many households are also reporting that their windows and doors are “defective”, ie., the windows do not open or close properly – for both double hung windows, crank windows, and storm doors; many windows fall when unlocked; and doors warping to name a few.  How and when will these issues be addressed by the Department?  Also, will the CDA work with the homeowners to repair/replace the defective windows and doors that are out of warranty?

6) Regarding the decision making process to rectify the “odorous window and door issues”, would the Department provide the organizational flow chart (involving the CDA, the RSIP boards, and the manufacturers of the windows and doors) of how decisions are being made to remediate and rectify these issues?

A) Please indicate who is the ultimate decision maker in this process?

B) Please indicate who will determine how the plans to remediate will be implemented and when CDA anticipates a final plan to be drafted?

C) Also indicate who’s responsibility (CDA, RSIP or an outside contractor) it will be to oversee the replacement and repair of the problematic windows and doors under the RSIP program?

RSIP/CDA inspectors performed an inspection on a home on May 16, 2018 where they conducted the “sniff test” and confirmed odors found in my windows.  However, on May 30, 2018, representatives from Harvey came and said no odor was found.  Since there is now two differing opinions on whether the odors are present, which opinion would be the determining decision in this example?

E) If the manufacturers refuse to accept responsibility for the odorous doors and windows, what, if any plans does the City have to make them rectify this problem?

A) If a homeowner has received windows under the RSIP program, once the life expectancy of the soundproofed windows has passed, are they entitled to receive new windows and doors again?