WE ONCE AGAIN find ourselves at the end of yet another Chicago summer. All of the signs are here to tell us so. Every day, we see the sun setting just a little earlier. Although our attentions to our Cubs and White Sox are still keen and alive for yet another month-plus, we find that our interest in sports games is now being compromised. At least a portion of the talk and interest has been ceded to the likes of the Bears, Notre Dame and our favorite high school's upcoming gridiron seasons. In short, it's the Labor Day Weekend !

BUT WE DO have what has become our end line and absolute cutoff point for our official summers. That would be our national Labor Day weekend; that being Saturday, Sunday and the first Monday of September. Other than a l-o-n-g weekend and some special "Labor Day" sales in various and unrelated merchandising fields. So then, what does Labor Day really stand for? What are we celebrating?

THE DICTIONARY DEFINES labor as: 1. productive activity, especially for the sake of economic gain; 2. the body of persons engaged in such activity, especially those working for wages. When used with a capital "L", Labor usually refers to Organized Labor; which is the third component to business, along with capital (finance) and management.

AS THE UNIONS have been an integral part of the American work scene for some time, they have had some ups and downs in their history. That is a story of going from a time when organizing for collective bargaining was considered to be a conspiracy against the government, to a gradual legitimizing and acceptance down to the present day with declining memberships and widespread criticism, particularly of those in the public sector. So, what has caused this turnabout in attitudes?

FOREMOST IN THE causes must be that the Organized 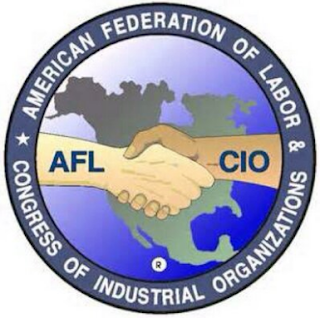 Labor Movement is largely a victim of its own successes. In an age long after the existence of long hours and other terrible working conditions have been eradicated from the American scene, employees are liable to take the position that union membership is unnecessary and superfluous. You know, the "whatta we need these unions for" attitude. For this we blame the individual unions (we counted over 70 independent, autonomous unions presently affiliates of the AFL-CIO). With only a handful of exceptions, there is very little done in educating the present day worker of what went before .

FROM THE HISTORICAL perspective, Chicago is rich in Labor History. In addition to the story of unionization, there have been some  major labor related incidents that occurred in the city. We had: the Haymarket incident of May 1, 1886; which started as a demonstration for the 40 hour work week. The Pullman Strike of May 11-July 20, 1894; which had national implications. Then there was the Memorial Day Massacre of May 30, 1937; which involved steelworkers in what has been called "the Little Steel Strike." Most recently, we had the Chicago Firefighters Strike of 1980; which was largely instrumental in finally bringing a Public Employees Labor Law to Illinois.

SECONDLY, THERE HAS been a greater involvement of labor in politics. In too many cases we hear of endorsements and large cash contributions to certain candidates. All too often the candidate being endorsed and bankrolled has positions on issues that are far from what those workers in the rank and file hold. Some unions have gone so far as to always being accused of "carrying the water" for such aspirants to public office.

AS FOR REMEDYING the situation, we offer a simple solution. Just let our labor guys return to the basics from which unionism had originated. And just what is that, we hear you say?  That would be having all unions confining their activities to improving and maintaining a high standard for their members in the areas of wages, hours and conditions and terms of employment. It's not rocket science or brain surgery. It can be done.

AS FOR THE celebration of this Labor Day weekend, enjoy the last days of official summer. Get over to the soon to be closing swimming pool, cookout and picnic. Maybe even go see a Labor Day parade. But never forget what the holiday stands for and for those who struggled for Labor's legitimacy.