Complains to Board of Elections 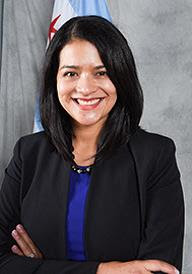 
Switching the 23rd Ward’s early voting site from its traditional home at the Clearing Branch Library to a site east of the airport is “unfair,” Ald. Silvana Tabares told the head of the Chicago Board of Elections.

In a letter sent this week to CBOE Executive Director Lance Gough, Tabares complained about she called a “last-minute switch” to Richardson Middle School, 6018 S. Karlov, “which is almost five miles away via car. The 13th Ward early voting location is less than one mile away from Richardson, which seems redundant and disproportionally disenfranchises the many residents who live west of Cicero Avenue.”

The alderman noted that in the presidential election of 2016, 4,925 people who live west of Cicero Avenue utilized early voting.

“It is unfair their early voting location was changed without any warning,” Tabares continued. “Voters will be turned away from the Clearing Library and will not have adequate time or means to go to Richardson Middle School, and many of these residents will be seniors. I understand the need to provide enough space for social distancing. That is why I believe it is misguided to change a location and thereby forcing senior citizens who would normally walk to their early voting location to use public transportation, placing themselves in greater risk of contracting COVID-19.”

To remedy the situation, Tabares suggested that the early-voting site be changed back to the Clearing Branch Library. If not that, she suggested other sites in Clearing and Garfield Ridge, like Dore School, 7134 W. 65th St., or Valley Forge Park, 7001 W. 59th St.
advertisement