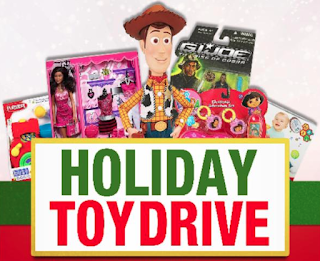 By Tim Hadac
Managing Editor
Southwest Chicago Post
A company familiar to many on the Southwest Side is stepping up for needy children this Christmas season.
All Exterior Contractors will be collecting unwrapped new toys from 10 a.m. to 1 p.m. Sunday, Dec. 6 in the parking lot of Parisi’s, 6216 West 63rd Street.

The toys will then be dropped off with officials from the Chicagoland Toys For Tots organization. They, in turn, distribute toys to boys and girls across the Chicago area via youth groups, shelters, hospitals and group homes, as well as the U.S. Marine Corps Reserve Toys for Tots Program.

Everyone at the event must wear a mask and abide by public health guidelines on social distancing.

Hall reportedly denied permits to the Chicagoland TFT, meaning that the group’s annual motorcycle parade up Western Avenue—said to be the largest motorcycle parade in the world—is cancelled for 2020. It had been scheduled for Saturday, Dec. 5.

Fearing that cancellation of the parade would lead to a large shortfall of toys this year, Chicagoland TFT officials have sounded the alarm for assistance.

“All Exterior Contractors is answering the call,” said AEC owner Geno Randazzo, who in recent years has successfully led several charitable events designed to serve a wide range of people—but especially children, senior citizens, active-duty military and military veterans, as well as police officers, firefighters and other first responders. “It's bad enough that kids basically lost their summer fun this year, due to the pandemic. I agree with the Toys For Tots slogan that says every child deserves a toy at Christmas. We’re not going to let City Hall cancel Christmas for boys and girls in need. If you have a toy to donate, now is the time."
Supporting All Exterior’s collection effort are a growing number of local businesses, including First Rate Realty, Mike Riordan State Farm Agency, Midway Storage, Amigo Pest Control and the Southwest Chicago Post.
# # #
advertisement