The Small Town in the Big City

By Joan Hadac
Editor and Publisher
Southwest Chicago Post
If anyone wonders why Clearing and Garfield Ridge are big-city neighborhoods with a small-town heart, look no further than Liz Trench.
Here’s the big-city part:
On Friday, Oct. 30, a masked thug walked into Clean Clean dry cleaners, 6417 W. Archer, and robbed the place.
A lone bandit walked up to owner Paul Lee, pulled a handgun and used it to whack him on the back of the head. And while Mr. Lee was bleeding and reeling from what may have been a concussion, the robber pulled the cash drawer and made off with a haul estimated in the high hundreds of dollars.
He remains at large and may be the same bandit who has robbed small businesses elsewhere on the Southwest Side and suburbs.
As anyone who has ever owned a business knows, a robbery can be a traumatic thing. Even days later you can feel terrified, violated and all alone.
Such was the case with Mr. Lee and Clean Clean--a well-liked, family-owned and operated business in Garfield Ridge since about 1984.
Here’s the small-town heart part:
Upon learning of the robbery in a local Facebook group, Clearing resident Liz Trench opened her heart and sprang into action.
Like many, Liz is a customer and fan of Clean Clean. She told me she has always been touched by how kind Mr. Lee is to everyone.
"It broke my heart when I found out,” Liz said. “He is kind, sweet, patient and polite. He works so hard."
Liz described the robbery as an "invasion into his life, business, community and home."
If you’re nodding a nod of recognition right about now, you may know what it is to own and operate your own small business. It is indeed your life and your home.
Anyway, Liz went over to Clean Clean to offer a few words of comfort. What she saw was not a surprise.
"His eyes were so sad and empty,” Liz said. “He looked like he hadn't slept. He had been crying. It was so heartbreaking to see. The light in his eyes was gone.”
She then presented him with a card and flowers. Mr. Lee was so touched, he had to choke back tears.
But Mr. Lee had not seen the last of Liz.
Liz admits that she’s "not a person to sit back and do nothing. It's been a long time since I sat back." She decided she wanted to raise money to help out the man who had treated her so well. She started a football pool for an upcoming NFL game.
Within just 24 hours, Liz raised $2,000—half going to prize payouts and half going to—well, you can guess.
So on Tuesday, Nov. 10, Liz walked into Clean Clean and presented a cheerful, colorful board with 20 $50 bills attached.
This time, Mr. Lee could not choke back his tears. They flowed 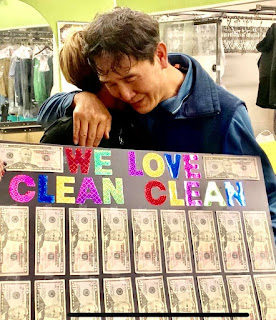 freely, if only for a few moments.
What Liz did may not take away Mr. Lee's memory of the robbery, but it clearly let him know he is not alone—that he is respected, liked and yes, loved by many people in the small town known as Clearing-Garfield Ridge.
The video helps tell the tale:
If “Liz Trench” sounds like a familiar name, it should.
Liz is a lifelong Clearing resident who graduated from Hale School and then went on to Maria High School. These days, she works at Hale Park as a teacher and coach and has worked at Wentworth Park.
She loves what she does, and through her work over the years, she has made life better for hundreds of people (if not more).
She made headlines in late 2018 when she earned the Teacher of the Year Award from the Garfield Ridge Chamber of Commerce.
Still a Clearing resident, Liz is married to her wife, Amy, and is mom to two boys ages 15 and 12.
So thanks, Liz Trench. People like you make this “small town in the big city” the special place that it is.
And my thanks to Carrie Buglio for alerting me to this act of kindness. Could not have told the story without you, Carrie.
# # #
advertisement