Backyard Barbecue in Garfield Ridge is a Hit, Again, With Eighth District Police

By Joan Hadac
Editor and Publisher
Southwest Chicago Post
I had the opportunity to visit Clearing resident Jennifer New and her mother, Tracie, at Tracie’s home in Garfield Ridge during a backyard barbecue late last month. It was filled with the aroma of great food, laughter and chatter.

The guests of honor wore blue.

Tracie and Jennifer threw the backyard barbecue to thank Chicago Lawn (8th) District Police, as well as other law enforcement officers who live in Clearing and Garfield Ridge.

The event is the fourth hosted by the mother-daughter duo.

“We started this last September when we saw the stress that police were going through [during the riots and looting that followed the release of the George Floyd videos],” Jennifer recalled. “Time off had been cancelled, and they were working 12-hour shifts under very difficult circumstances. We thought we needed to do something to support them, to acknowledge their sacrifice.”

The three events in 2020 proved highly popular, with officers chowing down on a variety of dishes. Purchased at a steep discount from Barraco’s restaurant in Evergreen Park, the pizza and other entrees were supplemented by any number of desserts made by Tracie, an accomplished home baker.

Much of the expense was shouldered by Jennifer and Tracie. Several local business owners, most notably Geno Randazzo from All Exterior Contractors and Sam Juma of Garfield Ridge Investments, have helped out.

Other local businesses and individuals who still want to pitch in are asked to stay tuned for details.

Both Jennifer and Tracie report that the barbecues seemed to have a calming effect on some who attended.

“It gave the officers a chance to sit down in a quiet, safe setting 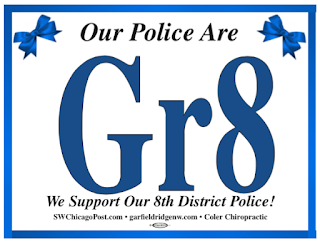 and just relax and enjoy a meal with us and each other,” Tracie said, adding that she found the experience to be a two-way street. The smiles and good cheer from the officers brought life and happiness back to a yard that had become a place of sadness after Tracie’s longtime companion, Al, died last year. The backyard had been a favorite spot of his.
“Before [the police barbecues], I had difficulty even going in the backyard without being sad or even shedding tears over Al,” Tracie said. “These officers don’t know it, but by stopping by, sitting down and being our guests, they actually helped me heal. I’m grateful to them. I hope it continues this year.”
# # #
advertisement