Bridgeport, Brighton Park, McKinley Park and Back of the Yards are neighborhoods considerably east of the Southwest Chicago Post's coverage area. But a lot of SWCP readers have friends, relatives and co-workers over that way--so it may be that someone somewhere knows who this bank robber is. 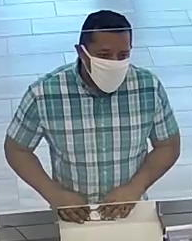 This serial criminal has been dubbed the Bicycle Bandit by the FBI's Chicago Office because he typically uses a bicycle as his getaway vehicle. True story.
He hasn't struck in a few weeks, but he remains at large. Here are crimes he is suspected of committing:
• Brighton Park Community Bank, 4334 S. Kedzie, at 4:27 p.m. July 27. He wore a white mask, a checkered button-down shirt, light-colored pants and dark shoes. 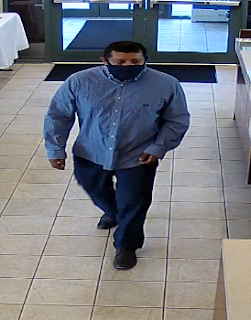 He should be considered armed and dangerous, so do not try to apprehend him yourself.
The FBI is offering a reward for information leading directly to the arrest and conviction of this bank robber. Report tips to (312) 421-6700 or tips.fbi.gov.
# # #
advertisement