Ever since the Southwest Chicago Post launched in 2012, our news coverage has included reporting on arrests made in the neighborhoods we serve (essentially, the six city neighborhoods closest to the airport). 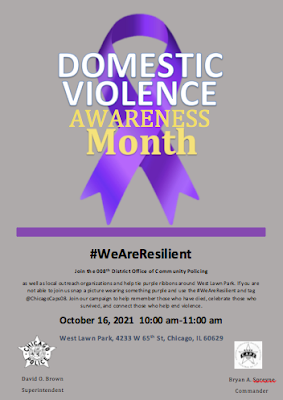 The arrests we report include cases in which people are charged with domestic battery. A lot of news organizations avoid that because--well, you'd have to ask them.
We don't. We believe domestic violence thrives when otherwise decent folks look the other way and pretend it doesn't exist.
So we won't do that, ever.
To that end, we encourage everyone who can, to join the Chicago Lawn (8th) District CAPS Office and local anti-violence activists in tying purple ribbons around West Lawn Park, from 10:00 to 11:00 a.m. Saturday, October 16.
This is being done to draw attention to the issue, rally support for victims and help build a more humane and just world in which domestic violence is not tolerated.
If you can't be there on Saturday, the CAPS Office asks that you take a photo of yourself wearing something purple, post it to social media and use #WeAreResilient and tag @ChicagoCaps08.
This is an opportunity to mourn those lost to domestic violence, celebrate those who have survived and escaped abusers, and work together to prevent domestic violence in the future.
As Domestic Violence Awareness Month moves forward, we'll offer a handful of concrete ideas on how all of us can work together to build that better world.
Thanks to the CAPS Office and all those organizing Saturday's event at West Lawn Park, and thanks specifically to CPD Officer Sara Trevino for sharing the news with us.
# # #
advertisement