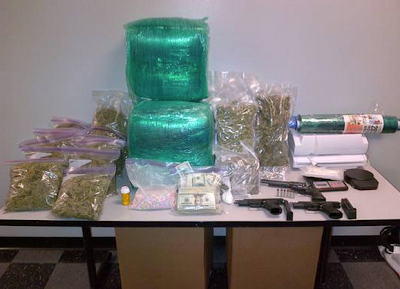 CHICAGO -- Chicago Police arrested three men and recovered four guns and more than $1.2 million in narcotics as the result of a Narcotics Division investigation that culminated Wednesday night in the Chicago Lawn (8th) District.

Prior to the seizure, Narcotics Division Squad E-1 team members received information enabling them to secure a search warrant targeting Torres. Upon execution of the warrant on Wednesday night at his residence on the 6500 block of W. 63rd Place , officers recovered 166 pounds of cannabis with an estimated street value of more than $1.1 million. Additionally, police seized quantities of crystal methamphetamine, ecstasy, and cocaine. Four firearms, two of which previously were reported stolen, also were recovered on premise, along with $44,000 in cash.